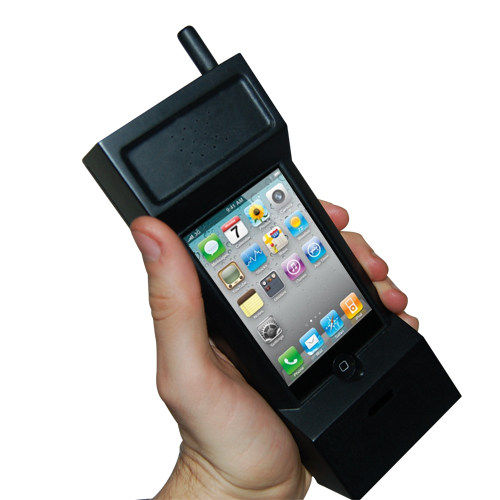 Transform your iPhone to an 80s iBrick

Here’s a retro case that can transform your iPhone  – one of the world’s thinnest smartphones – into a 1980s brick.

The case, developed by UK company Thumbs Up, fits the iPhone inside a custom made slot.

Once connected users can still have all the 21st century features of the iPhone but now with a 1980s look.

Mobile phones in the 80s were as large as the heads they were being held against but this was quite a status symbol at that time.

The product can fit the iPhone 3GS and iPhone 4 and can also be used as a vertical stand for your desk.

Another benefit is the Thumbs Up case will offer sturdy protection in the event it is bumped or dropped.

“Technology may have advanced to create tiny phones but it was only a matter of time before big was big again,” Thumbs Up co-founder Wojtek Kolan told the Daily Mail.

Another retro product by the same company is an iPhone cover  that looks like an old audio cassette cover.

The iTape Deck includes a silicon cover which makes the phone look like a cassette.

The case then slips in to a plastic cover which offers added protection and can also act as a stand to watch videos.

iTape Deck is only compatible with the older iPhone 3GS.

The cases will be available in Australia in the coming weeks.