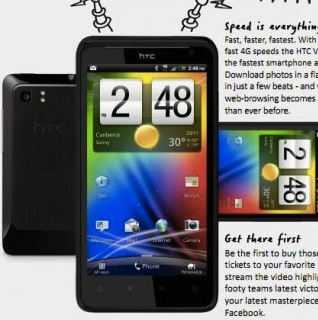 Telstra will release Australia’s first 4G handset – the HTC Velocity – at the end of January according to an Australian retailer at the Consumer Electronics Show.

Telstra today set up an “expression of interest” page on its website to allow customers to register and receive more information.

Tech Guide was told by a retailer with knowledge of the subject that the new HTC 4G handset will be released by Telstra on January 24 on a $79 plan.

Telstra’s only response to this news is that it will release a 4G handset in the first half of 2012.

At that launch Telstra had a prototype 4G handset from HTC.

The HTC Velocity is running Android 2.3.4 and has a 4.5-inch screen, a dual core 1.5Ghz processor, an 8 megapixel rear-facing camera which can shoot full high definition 1080p video and a 1.3 megapixel front facing camera.

Telstra’s 4G network will allow even faster downloads and data access on its network.

Optus and Vodafone have also been hard at work rolling out their own 4G networks which will be activated later in 2012.

At CES there have been a number of 4G handsets on display which will eventually find their way to Australia including the Sony Ericsson Xperia Ion and the LG Spectrum.

Two Blokes Talking Tech on the show floor at CES