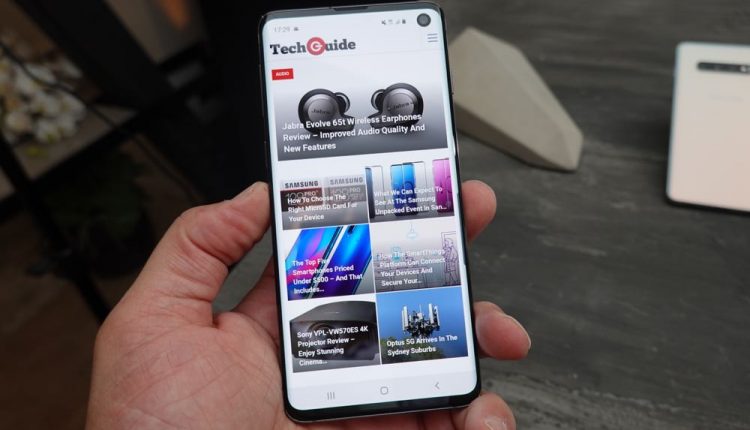 Tech Guide took a hands-on look at the three S10 devices and was immediately struck by the build quality and incredible sharpness of the new Dynamic AMOLED displays.

On the design side, the S10 and S10+ don’t look wildly different to the S9 but they do have slightly larger screens and that new in Infinity O,  or hole punch, screen so the  front cameras can be positioned in the top right corner without a notch. 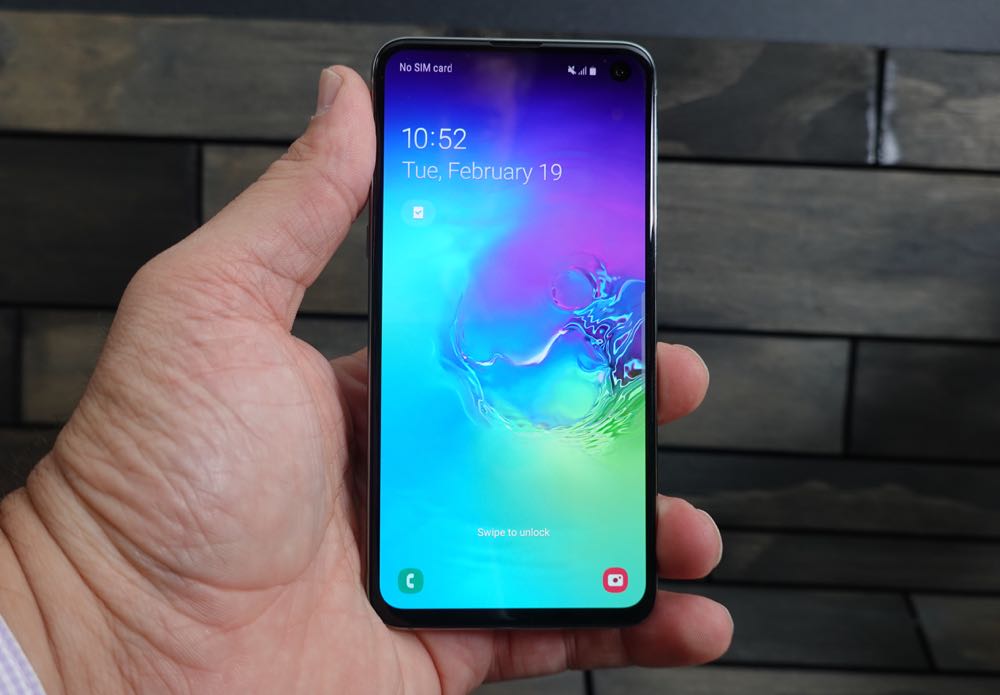 Instead, the screen goes edge to edge and top to bottom with a screen to body ratio of a massive 93.1 per cent.

So now you get virtually a full screen experience. The hole punch isn’t too intrusive when watching content, using a apps or viewing a website.

We took a look at our Tech Guide site on the Galaxy S10 and S10+ and we were able to view more of the page than usual. 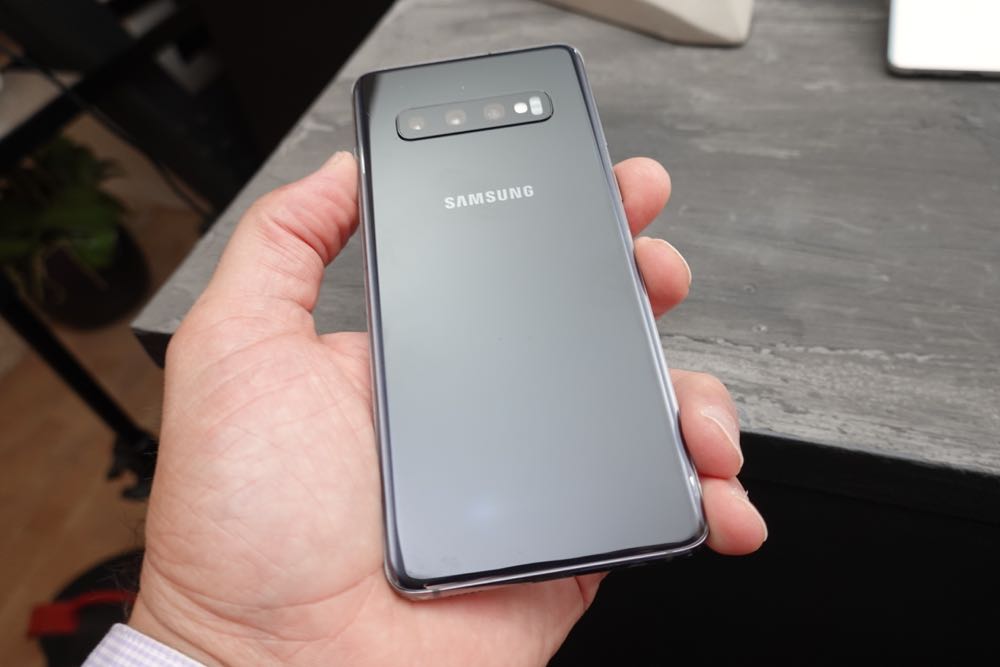 Another thing that struck us was the quality of the Dynamic AMOLED display.

Contrast was also impressive and we’re looking forward to testing out the HDR 10+ compatibility with some fresh content. 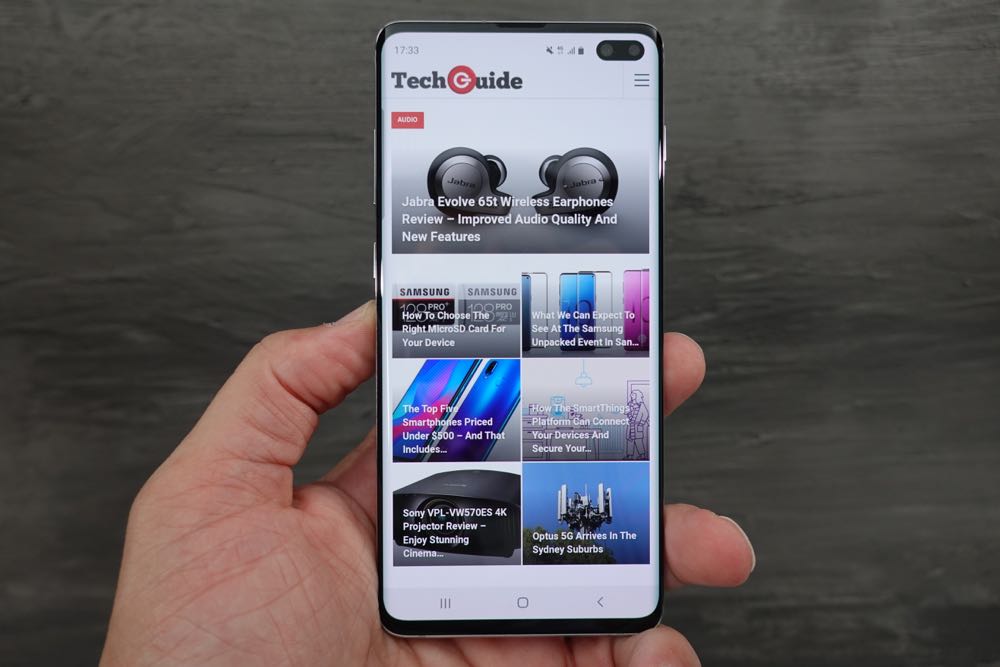 Another new feature of the S10 and S10+ is the Ultrasonic Fingerprint Sensor which unlocks the device through the screen.

So you won’t find a fingerprint reader on the rear panel like last year’s model.

Instead you place your finger near the bottom of the screen on the image of the fingerprint and a split second later the devices are locked.

We tried it several times and it worked instantly every single time. 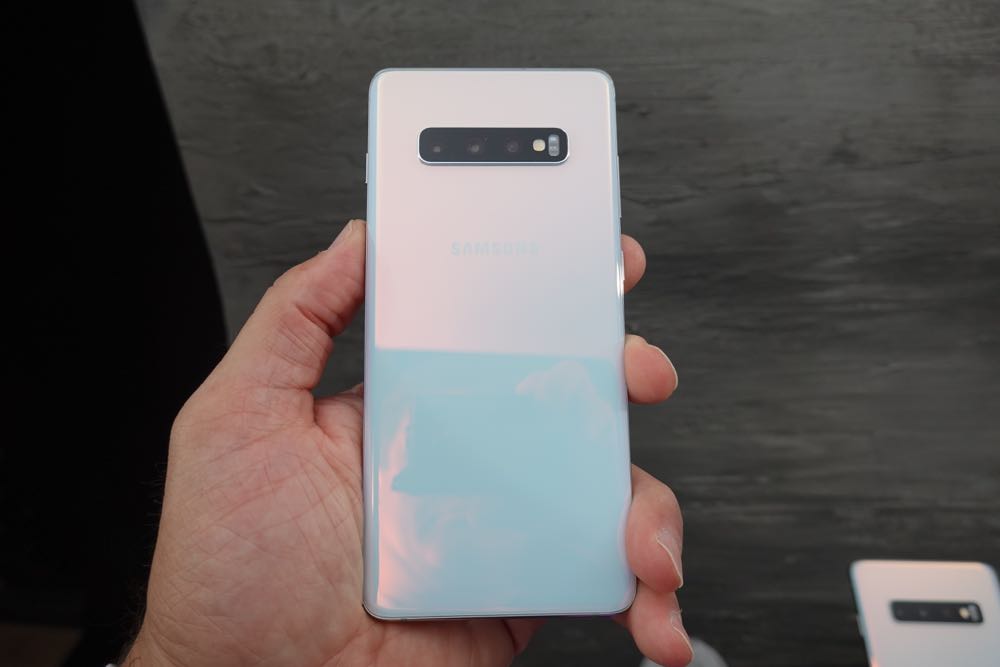 A cool new feature is the triple lens camera system which includes one ultra-wide lens to match the same 123-degree field of vision of the human eye.

It allows users to fit in a lot more into their shot.

It’s quite easy to toggle between the three lenses on the camera screen.

The Galaxy S10 has an intelligent camera which can choose the best mode based on what you’re trying to photograph using AI instead of the user having to adjust the settings manually.

With the camera being the most used feature on a smartphone, the camera system on the S10 is sure to be popular. 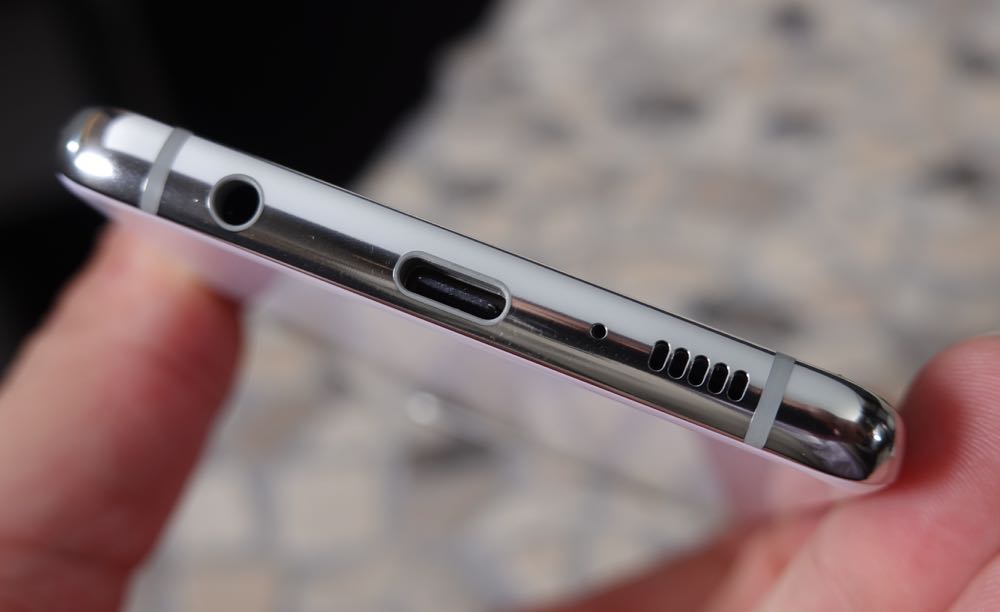 And both the rear and front cameras can shoot 4K video.

The new Super Steady recording has also got your back to take the shakes out of all of your footage.

Another great new feature is the Wireless PowerShare which turns the S10 into a wireless charging mat to power other phones or the Galaxy Watch Active and Galaxy Buds on the move.

This is going to be a popular addition.

So how do these new devices stack up against the competition? 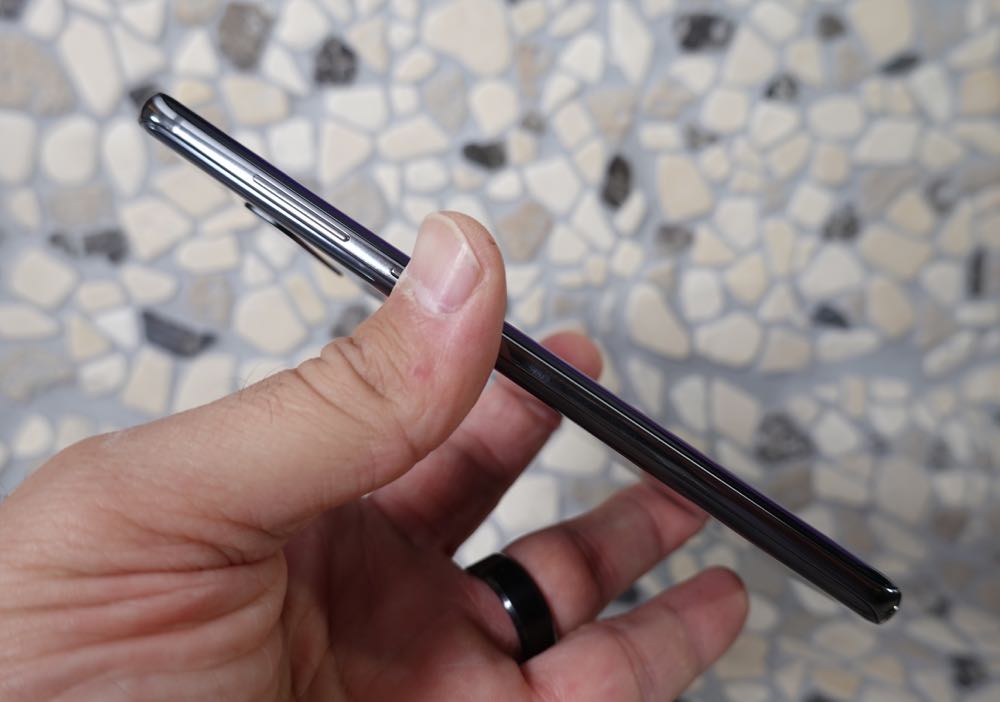 Yes, the S10 and S10+ features the in-screen fingerprint reader, wireless reverse charging  and the three camera system that have been seen before with the Huawei Mate20 Pro.

But Samsung has put this package together in a really interesting and attractive way that will keep existing Samsung customers loyal and quite possibly attract new customers to the brand.

We will also impressed with the quality and finish of the Samsung Galaxy S10e,  the entry-level device in the family. 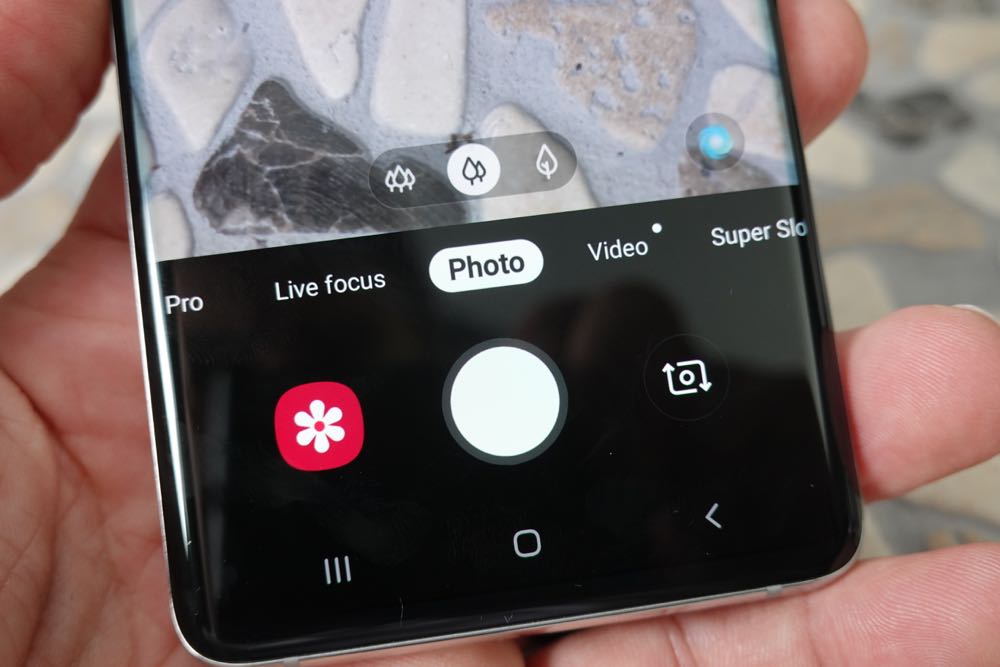 It has a two lens camera system and doesn’t have the in screen fingerprint reader but will  still be a compelling choice for users.

The most noticeable difference with the S10e is its flat rather than curved edges of its AMOLED display.

Size wise, at 5.8-inches, it’s still a decent size but suitable for users who don’t want a larger device. 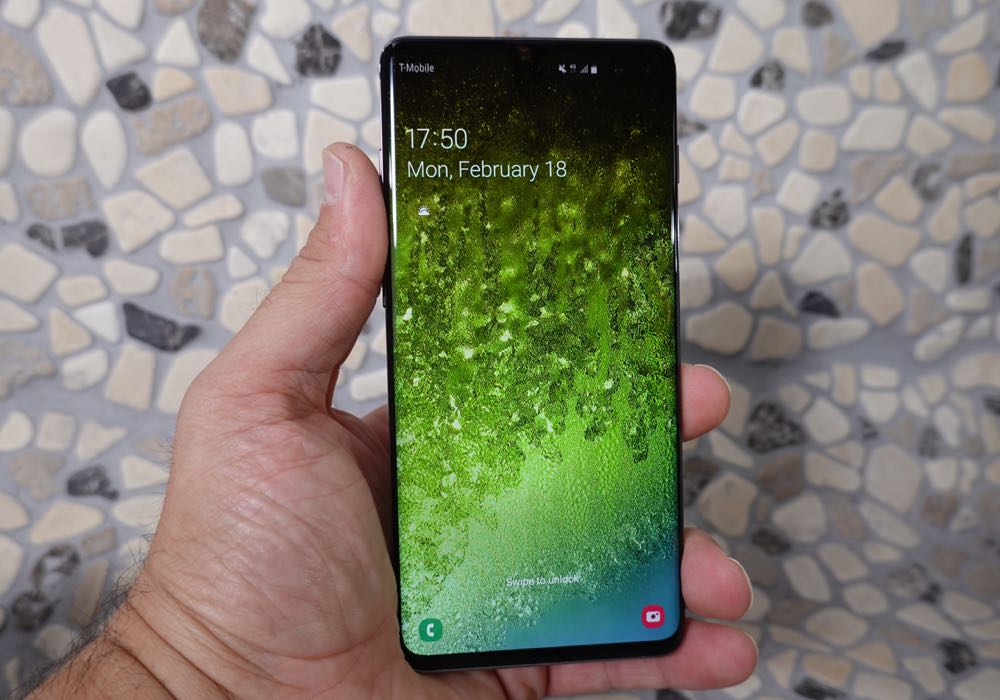 The fingerprint reader for the S10e is located on the power button along the right edge which is where your thumb would normally come to rest anyway.

Overall, Samsung has delivered yet again a compelling range of devices that will encourage existing Samsung users to stick with the brand as well as potentially attracting users looking for a change and a range of new and interesting features.

Samsung has a special offer for customers who pre-order a Galaxy S10 – they will receive Samsung’s new Galaxy Buds (valued at $249) as a free bonus.