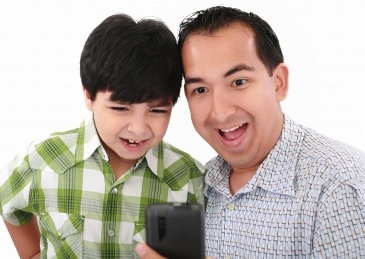 Forget the hand me downs when it comes to technology – it’s the kids in the family giving their parents hand-me-ups according to new research from Optus.

Gone are the days when the parents owned the latest devices like mobile and tablets and then sent them down the line to their children.

Today in 58 per cent of Australian families, it’s the younger generation with the newest products according to the Optus research which was conducted among 1,256 parents of children aged between 12 and 30.

Close to four in 10 parents (38 per cent) have not even upgraded their old mobile to a smartphone.

And of these parents, 12 per cent said they were worried theirs kids would be jealous of them if they owned a newer device than their children.

In 68 per cent of home, Dads are no longer the tech experts they used to be with tech savvy kids across the country taking over this title.

“The new ‘digital generation’ are up to speed on the latest devices, expect instant access and want to be connected ‘anywhere, anytime’,” says Dr Kristy Goodwin, director of Every Chance to Learn.

“Parents, who are often less digitally savvy are struggling to keep up with both technology and their children’s device ownership and are ending up with their second-hand cast-offs.”

“The Optus study mirrors concerns that are raised in the parent seminars I deliver where parents don’t know how they can possibly keep up with their children’s tech prowess.

“But rather than feeling frustrated, parents should embrace their kids’ technical skills and use it as an opportunity to bond, ask questions and remedy IT issues at home.”