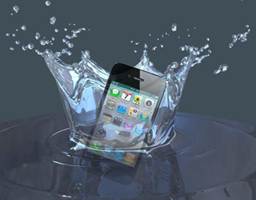 New iRescue kit can save your wet smartphone

Water and mobiles don’t mix but that hasn’t stopped thousands of users dunking their phones with almost 10 per cent admitting they dropped them in the toilet.

A new iRescue kit has been released which can restore a mobile phone, MP3 player or digital camera that has accidentally taken a dip.

Research by Hydrosorbent Dehumidifiers, the company behind iRescue, says woman aged 30-49 are the worst offenders when it comes to losing their mobiles down the loo.

There were 1000 Australians interviewed for the survey with spilt liquids, rainwater, drinks and toilets the leading causes of water damage.

Almost 70 per cent of respondents assumed they would need to replace their water-damaged device while 40 per cent admitted they didn’t know what action to take in the event of an accident.

“Mobile phones are such an integral part of our lives for both business and personal use, and clearly liquids are among the biggest threats to their function,” says Hydrosorbent general manager Diana Williams.

“No one can afford to lose the use of their mobiles – their contacts, photos, data and ability to communicate by phone, text or email – but surprisingly, most people don’t know what to do if their mobile is damaged.”

There are a few myths and household remedies to rescue your soaked mobile that have done the rounds.

One is putting the device inside a cup of rice.

But what people don’t realise is the rice has already reached its maximum absorption by the time it reaches your pantry and is not really an effective solution.

The other popular rescue attempt for mobiles is the hair dryer.

Blasting the device with hot air can often make the situation worse because it forces the moisture even further inside the product.

The iRescue kit contains special silica gel absorption material that, when sealed inside the bag with the water damaged device, can draw out the moisture and revive the product.

According to the company, there is a 95 per cent success rate when the kit’s instructions are followed.

Priced at $17.95, the iRescue kit is also the only water rescue solution that can be used over and over again.

At this price, customers can purchase iRescue now to make immediate action in case they have an accident.

“They are like a first aid kit for your phone,” Williams said.

Enki case can make your iPhone waterproof to 10m