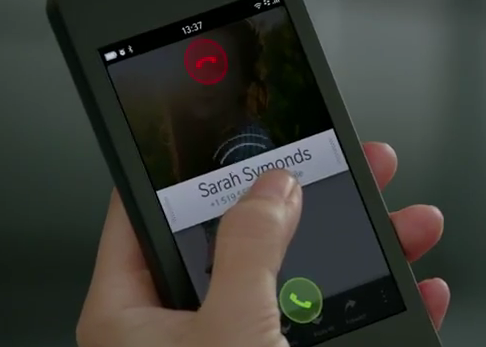 Research in Motion has unveiled the features of its new BlackBerry 10 operating system which it hopes will pull back ground lost to Android and the iPhone.

New CEO Thorsten Heins took to the stage at BlackBerry World in Orlando, Florida to reveal the features of BlackBerry 10 along with a new touchscreen prototype device.

BlackBerry 10 takes a leaf out of the BlackBerry Playbook tablet’s book with gestures.

Users moving their finger from the edges of the screen will reveal notifications, return to the home page and switch between open apps.

Heins says these actions create a “flow” to make the device and the software easier to navigate.

A new virtual keyboard was also demonstrated and showed it can adapt to a user’s typing patterns.

The software can even guess the next word you’re likely to type based on the sentence syntax and context and allows the user to select that word by sweeping up on the keyboard.

Another impressive feature was the BlackBerry 10’s new camera software which can correct imperfections in photographs, such as a person blinking at the wrong time, by winding back to the right point.

BlackBerry has struggled in the past producing a decent touchscreen device while users left the platform in droves to either the iPhone or an Android device.

BlackBerry 10 seems to have brought the best features of the once-popular platform and found a way to translate them to a touchscreen.

Of all smartphone users 63 per cent access social networks on their device while 87 per cent of BlackBerry users do the same thing.

65 per cent access organisational tools – on the BlackBerry 91 per cent of users do this.

The other challenge is to attract developers to the BlackBerry platform to create more apps and the good news was many in attendance liked what they saw.

There was no release date announced for the new BlackBerry 10 operating system and also no indication whether the new software will run on devices with physical keyboards.