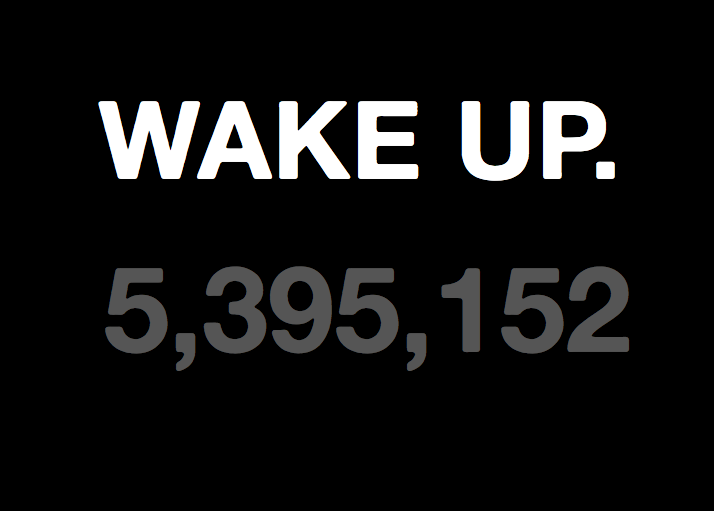 The company behind a mysterious “Wake Up” campaign remains a mystery after Samsung issued a statement today denying it was behind it.

It all started last week when this writer received a mysterious letter in the post – a black envelope and a black piece of paper inside which simply read: Dear Steve: Wake Up.

It is understood this bizarre letter was sent to other technology journalists as well.

Then, on Thursday, a black bus with “Wake Up” on both sides parked outside the Sydney Apple Store in George St and let out a mob of protesters wearing black t-shirts and holding Wake Up signs and chanting the phrase.

Blogger Nate Burr happened to be in the store at the time and recorded the incident and posted it to YouTube where it has been viewed more than 407,000 times.

Initially fingers were pointed at Samsung which had created cheeky ads in the past which have taken a shot at Apple.

One of Samsung’s recent ads for the Galaxy Note showed people in line outside a store waiting for the new iPhone who notice the larger Android smartphone being used by a person walking past.

There have also been a number of plain black Wake Up billboards while the pool at Bondi’s famous Icebergs was also transformed with the cryptic message.

A website – wake-up-australia.com.au – has also been set up and simply features the words Wake Up and a clock counting down 5,412,000 seconds which, after a quick calculation, will reach zero next week.

An investigation into the ownership of the Wake Up domain name by Macworld indicated the URL is part of a list of web addresses owned by Research in Motion, the company behind the under-performing BlackBerry smartphone.

Here is Samsung Australia’s marketing director Arno Lenier statement denying it was behind the Wake Up stunt:

“It’s great to know we’re front of mind with parts of the media as well as a good few bloggers when it comes to discussing campaigns like “Wake Up”.

“As a market leader in smartphones we think Australians have already woken up to the multitude of choices available, but kudos to whoever is behind the campaign – clearly its captured significant attention in the market and we are as keen as everyone else to discover who is behind it.

“As ever, we look forward to providing all Samsung fans (and potential recruits) with even more freedom of choice in the future through our innovative range of smartphone devices.”