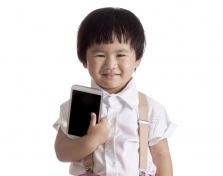 Australian kids are using smart devices unsupervised to surf the web, use social media sites and access content, a new study from Kensington has discovered.

The survey, hosted on the Australian pregnancy and parenting site The Bub Hub, revealed 99 per cent of parents allowed their kids to use their smartphones and tablets.

Before smartphones and tablets reached the heights of their popularity, the only way children could access the internet was on a computer positioned in a central part of the home.

And this was also under close adult supervision and often using parental control applications that would filter out any inappropriate content.

Now more than half are allowing their kids connect to website and content without checking on them.

But another downside of handing off your smartphone or tablet to your child is they sometimes drop them and damage or break them.

“Kensington is in the business of designing accessories to protect smart devices, so we wanted to increase our understanding of the ways families, parents and children use theirs,” says Sam Goldstein, Kensington’s marketing and business development manager.

“The survey found parents are not only using devices to entertain or distract children; but also for activities such as education and therapy, and in places as diverse as camping or even while at church.”

“It is interesting to see that while parents are happy to allow their children to use their smart devices unsupervised, they are also reporting high levels of damage at a significant cost.

“Protecting smart devices with a suitable hard or gel case is the most effective solution to general damage prevention; but it’s the smallest fingers that can cause the biggest breaks.

“A more robust solution – like our range of SafeGrip Rugged Cases for iPad – is required to keep devices safe when being used by children.”