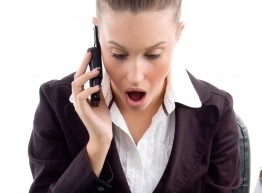 More than half of mobile users are not using their full monthly call, text and data allowances, according to the Australian Communications Consumer Action Network.

A study by ACANN in association with Choice and the Consumer Action Law Centre shows Australian customers are giving telcos money for nothing by paying for services they don’t use.

More than 50 per cent of customers who sign up for caps with a set amount of data, texts and calls are falling short of the limits they are paying for month by month.

“You wouldn’t buy $50 of groceries and throw half of them away every week, so why do it with your mobile phone spend.”

And 15 per cent of consumers were not aware of they had used their mobile phone allowances each month which shows Australians could be a lot more active in finding better value with their plans.

“The telco sector is notorious for being a ‘confusopoly’, giving consumers the run-around with complex plans and pricing, and this research shows far too many Australians are settling for second-rate deals instead of switching,” says Choice spokesman Tom Godfrey.

“Unfortunately that means less competition for everyone, because telcos aren’t under pressure to deliver the best value products.”

Capped plans will always been the minimum of what you pay whether you use the allowances or not.

Of course the charges are always forthcoming if a customer ever exceeds their limit.

But among these users only 50 per cent did something about it.

“When people have chosen a plan that reflects the amount they’re prepared to spend on their mobile each month, unexpected additional charges can be a rude shock. Consumers need to challenge these extra charges,” says Consumer Action Senior Campaigner Sarah Wilson.

There are a number of ways to make sure you getting the best value out of your telco.

Each month when you receive your mobile bill, go through it carefully to check for any additional charges.

Pick up the phone and question your mobile provider if you have any queries about additional charges or data usage you don’t believe was incurred.

It is possible to get a refund or a credit on your next bill of you find any unnecessary charged.

You can always contact the Telecommunications Industry Ombudsman if you’re not satisfied with the response from your telco.

ARE YOU ON THE RIGHT PLAN

When you take a look at your bill check you to see how much of your plan you are using.

It may be possible to opt for a cheaper plan if you’re paying for a plan you’re not making the most of.

If you are under utilizing the allowances your plan offers it might be a good idea to shop around for a plan that suits your usage patterns.

If you’re approaching the end of your contract it would be a good idea to use comparison sites like WhistleOut and OzCompare to find a better deal.

Can you keep your hands off your mobile device at the dinner table?

Keyport Slide has reinvented the keyring