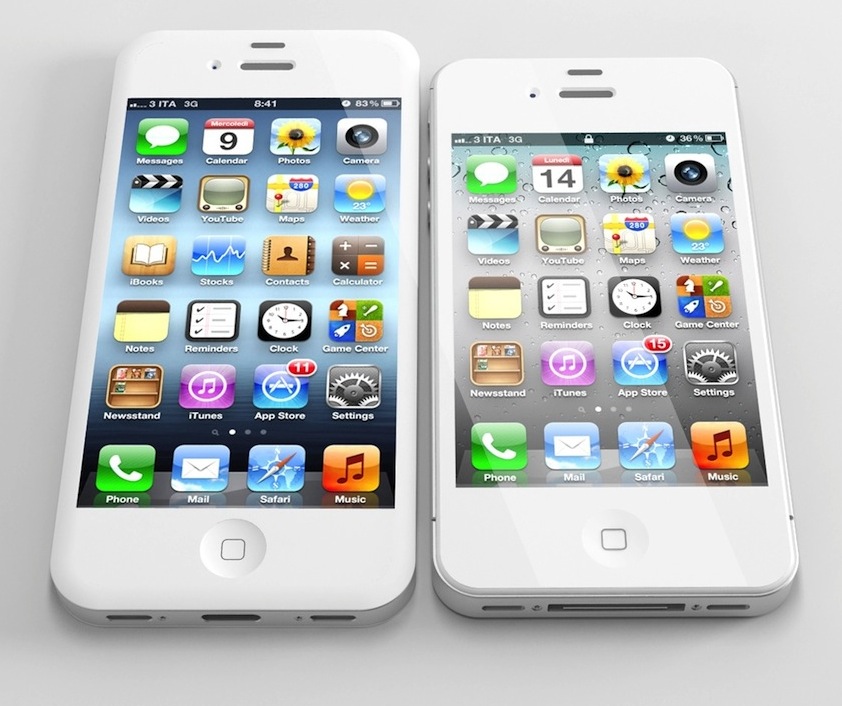 It’s less than a month until Apple’s Worldwide Developers Conference and there are already whispers about a next iPhone along with new MacBooks and iMacs.

The iPhone 4S was unveiled in October last year at a special media event at Apple’s Cupertino headquarters.

Speculation about the new iPhone has been ongoing for several months with most common expectation being a larger display.

The 3.5-inch screen of the current iPhone 4 and 4S is being dwarfed by the latest Android competitors which now boast screens as large as 5.3-inch.

The most common screen size in the latest batch of smartphone releases is well within the 4-inch and above range.

iLounge is reporting Apple is looking at a 4-inch display which would add more height than width to the device and even allow an extra row of apps to fit on the screen.

Macrumours has actually gone ahead and rendered a mock up of how it believes the iPhone 5 will look.

Another strong rumour is the new iPhone featuring a smaller dock connector on the bottom edge of the device.

Moving on to the MacBook Pros, which are due for a refresh, the feeling is the product will be noticeably thinner than the previous model.

9to5Mac reports it has uncovered specific details about the new 15-inch MacBook Pro which will have a much thinner design thanks to the removal of the optical drive while including USB 3.0 ports and Ethernet and Thunderbolt ports.

There is also a lot of talk about Apple including a Retina Display on the new MacBook Pro and MacBook Airs to give it a much higher screen resolution.

Retina Display was the major new feature of the new iPad which was released in March and increases the chances of this feature being included in the upcoming MacBook products.

Speculation is also high that the new 21.5-inch and 27-inch will also be upgraded to include a Retina Display.

The Worldwide Developers Conference kicks off on June 11 in San Francisco.