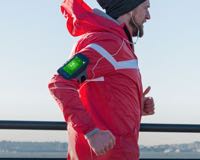 New research has revealed iPhone users are more likely to use the features on their devices along with health and fitness apps to stay in shape.

The latest study by Roy Morgan shows Apple iPhone users are more inclined to sweat it out in some form of exercise than Android users.

More than 12 million Australians now use a smartphone which is quickly becoming an invaluable tool to monitor our health and wellbeing.

According to the Roy Morgan research nearly one in five iPhone users (19.3 per cent) regularly go the gym or do weight training as compared with 16.8 per cent of Android users.

It’s the same story with jogging with 16 per cent of iPhone users hitting the road up against 11.4 per cent of Android users.

But Android users pipped iPhone users when it comes to cycling – 9.1 per cent v 8.5 per cent).

“With smartphones approaching ubiquity and already (or soon) able to monitor heart-rate, steps taken, sleep patterns, and even blood-sugar levels, manufacturers and app developers are racing to be at the forefront of the trend,” says Tim Martin, general manager, media at Roy Morgan Research.

“Judging by the higher proportion of users with iPhones who regularly participate in personal fitness activities, it would seem Apple may have the potential edge when it comes to connecting to health-conscious consumers.

“It is conceivable that quite soon our phones will be diagnosing latent health problems we don’t even know we have.”