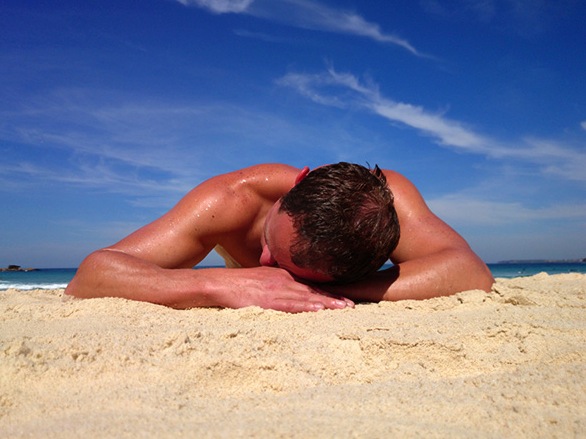 Sony approached Rex for the project to prove the new shooter on its latest Xperia Z1 smartphone can provide the sort of quality even a professional photographer would appreciate.

The Sunbaker photograph was taken back in 1937 and has become one of the most widely acclaimed Australian images of all time.

So Rex’s challenge was to not only recreate the famous image captured by his father but to capture it all with the Sony Xperia Z1.

With a 20.7-megapixel camera, the Sony Xperia Z1 has the credentials to some capture high quality images.

And that’s exactly what Rex Dupain did after recreating the Sunbaker and capturing other impressive images from Bondi Beach with the lifesavers from the popular Channel 10 reality show Bondi Rescue.

“With the mobile phone, especially this one (the Xperia Z1) you can blow up images up and hardly see anything, no pixels at all,” Rex Dupain said.

“We had six attempts at the Sunbaker – it was spontaneous pose in 1937 but we had six goes at getting it right.

“There’s a tilt of the head, water on his arms and light showing under his armpit so you can see the sky.

“I had to lie on my stomach and dig a hole with the Z1 on the ground to get the light of the sky through his armpit.

“We had strips made at the lab – nothing was changed or manipulated and when I saw the strips I thought “my God” – it was hard to believe it was done with a smartphone.”

The Sony Xperia Z1 will be released in October.