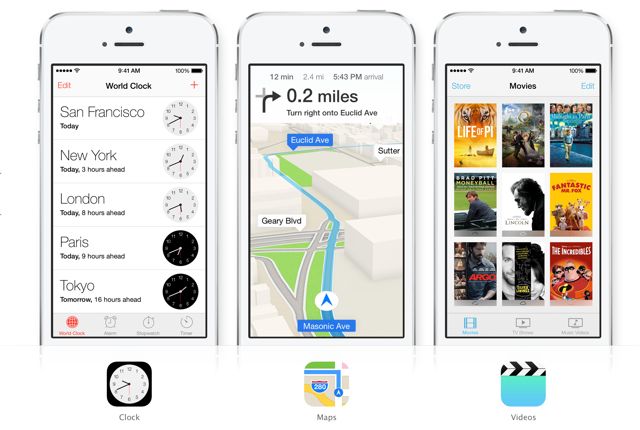 The new iOS 7 operating system for the iPhone and iPad will be available any minute and it is a huge that change users will feel they have a newer, better device.

Not since the introduction of the iPhone has there been such a drastic change to the device’s software not only in design but also in features.

Anyone using an iPhone 4 or later can install the update. iPad users can also install iOS 7 if they have an iPad 2 or any iPad released after that, including the iPad Mini

.You’re probably noticing lots of app updates coming in on the iPhone and iPad App Store. These are updates to offer full iOS 7 compatibility and stability.

iOS 7 will also be preloaded on the new iPhone 5C and iPhone 5S which go on sale from Friday at 8am.

The biggest thing users will notice is the new look of iOS 7 – it’s a lot simpler, sleeker and minimal.

There are no more wood, felt, paper or metal finishes – it’s all a consistent flatter look.

Shiny message bubbles are no more. Gone too is the old “slide to unlock” bar. In there place are more streamlined versions.

Even the lock screen and wallpaper have been changed.

The lock screen is more transparent so your picture shows through full screen. There are some dynamic wallpapers included with iOS 7 that reacts to the way you move the iPhone.

And the wallpaper on the home page also reacts to the iPhone’s accelerometer. When you move the device it’s almost like the icons are floating above the wallpaper and that you can look behind them.

And new features like Control Centre and Notifications, which both cover the screen you happen to be using when you engage them, still have a translucent look to them so you can still get a sense of what’s beneath them.

SEE ALL OF THE NEW iOS 7 FEATURES HERE

There are a couple of ways to install iOS 7 – either over the air with wi-fi or by connecting your device to your computer and installing through iTunes.

To download via wi-fi you’ll need to make sure you have more than 50 per cent battery otherwise plug in a power cable. And don’t even try to download it over 3G or 4G – iPhone won’t let you anyway because it’s a big file.

Go to Settings and then click General and the Click Software Update – the iOS 7 update should be there.

On iTunes simply plug in the iPhone or iPad – go to the summary page and click on Update – it should say there is a new iOS 7 update.

But be sure to back up your iPhone or iPad before completing the update.