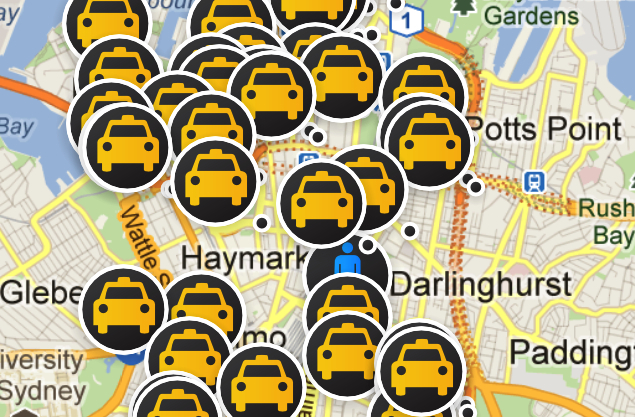 Popular goCatch taxi booking app will begin a month-long trial to pay cabbies extra so people can get home from trouble spots like the city and Kings Cross.

From Friday (January 24) drivers will be offered up to an extra $20 between 1am and 4am to encourage them to pick up passengers in areas they would normally avoid.

The move comes after Barry O’Farrell announced plans designed to reduce the amount of alcohol-fuelled violence.

Part of the problem stems from the fact that there are not enough cab drivers to help get people home from areas like the city and Kings Cross.

This problem is compounded because the 3am nightclub closing times coincide with the cabbie changeover.

goCatch is a free app for iOS and Android devices that connects passengers directly with cab drivers in their area to make a booking.

Users can then see the cab’s location on the app in real time and can also call the driver directly rather than talking to an automated booking service.

goCatch says it will try this new scheme for the next four weeks and send the results to the NSW Government.

“The Government, quite rightly, has recognised the significant issues facing this city and has taken action. We commend them for doing so, but there’s more work to be done,” said goCatch co-founder Andrew Campbell.

“What we know is that many Sydney cabbies simply avoid the CBD, the Rocks and Kings Cross areas altogether late on a weekend because of the recent trouble.

“They tell us that it’s not worth the hassle and the aggravation. The by-product of that means that sometimes demand outstrips supply and passengers have difficulty finding a cab. That can often lead to other problems too.”

Mr Campbell says the results of the new goCatch initiative will be closely monitored and the findings will be offered to the NSW Minister for Transport.

“If the trial is successful, perhaps there is a partnership we could form with the Government to roll the incentive package out further across the state,” Mr Campbell says.

“At the end of the day, this is all about ensuring people get home safely, rather than wandering the streets with a belly full of grog.

“We want to avoid another tragedy and even if this trial costs thousands of dollars, if it saves lives, it’s money well spent.”

Free iPhone app can find the nearest taxi on a map

Kolibree the connected toothbrush keeps an eye on your brushing habits