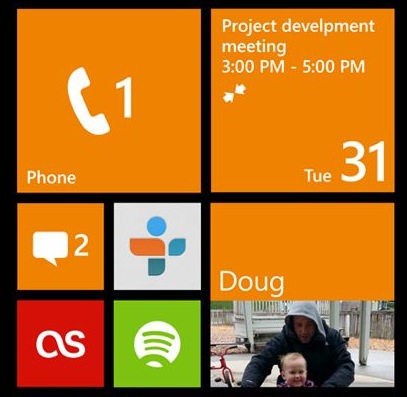 Microsoft has revealed its new Windows Phone 8 operating system which radically improves the appearance and performance of the mobile platform.

WP8 draws most of its capabilities from Windows – the most widely used operating system in the world.

This new mobile has seen some major design changes which will suit a wide range of users – consumers, business and developers.

And the good news for current Nokia Lumia owners is some of these new features – new start screen, wi-fi hotspot capability, media content streaming and flip-to-silence – will be available with a software update.

Here’s a look at the new features:

The most visible change to Windows Phone 8 will be the ability to customise the size of the tiles in the home screen.

These live tiles will display all of the latest information but the user can make these tiles as large or as small as they like. This will allow users to fit even more live tiles on their home screen.

Nokia’s Lumia 800 and 900 are among the popular Windows Phones on the market at the moment but they are both powered by single core processors.

Windows Phone 8 will be able to support multi-core processors and be ready for the powerful handsets of the near future.

NFC is becoming a popular feature of many of today’s smartphones and enables users to share files, photos and contact info just by bringing compatible mobiles near each other. Windows Phone 8 will offer NFC compatibility.

The Windows Phone 8 smartphone also double up as a wallet and will allow users to make contactless payments at participating stores and will also be able to securely store debit and credit cards, boarding passes and other important information.

Nokia was also on stage with Microsoft at the Windows Phone Summit and the company used the event to take the opportunity to announce a partnership with game company Zynga.

This agreement will mean games like Words With Friends and Draw Something will also be coming to the full range of Lumia phones later this year.