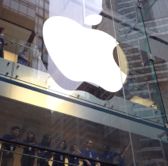 Crowds of people lined up for more than two days to be among the first customers in the world to get their hands on Apple’s new iPhone 4S.

The Sydney CBD was abuzz in the early hours of the morning when the line from the George St Apple Store stretched around the block.

Other crowds were gathered across the road at the Telstra store as well the Optus and Vodafone stores a short distance away.

The first two customers in the line, 15 year olds Tom Mosca and Wil Batterham, had to get their parent’s permission to set up camp outside the Apple Store 80 hours before doors swung up at 8am.

“Our parents know how much we love this stuff. That’s why they let us do it,” said Mr Mosca.

As is customary at Apple product launches the store staff in their blue t-shirts were clapping and cheering in preparation for the onslaught of customers after the new iPhone 4S.

Staff were working their way up the line handing out cards to help identify the colour and capacity iPhone 4S model they intended to buy.

Anyone who was given a card was assured of getting an iPhone 4S today. There is believed to be a healthy level of stock in Australia to cope with demand.

There were also large crowds gathered outside other Sydney Apple stores in anticipation of the launch.

The biggest lines at Apple Stores were for outright purchases of the iPhone 4S with a shorter lines for those wanting to sign up to a plan.

Best of finding stock going into the weekend will be at one of the 13 Apple Stores in Australia.

The main stores of Telstra, Optus, Vodafone were doing a healthy trade this morning and we found out there were also short lines at the suburban stores.

Australia will get the iPhone 4S before the US