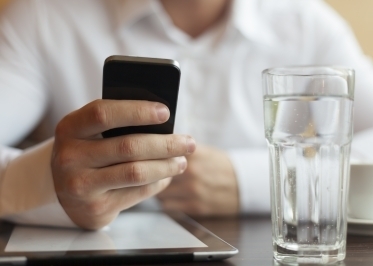 Can you keep your hands off your mobile device at the dinner table?

Can you keep your hands off your smartphone during meal times? That’s the question KFC is asking in the hope we can take a break from technology when we eat.

According to research commissioned by KFC, nine in ten Australians think technology has made us less social at mealtime with one in four spending at least five minutes using personal devices during meals.

To help, KFC decided to trial Mobile Collection Buckets at its Northmead store in Sydney to encourage customers to spend less time on their device and more time talking to each other while they were enjoying their meal.

Store managers suggested the trial after noticing a number of families and groups of friends sitting together in silence because they were using their smartphone and tablets.

Tech commentator, family man and one half of the Two Blokes Talking Tech podcast Trevor Long was challenged by KFC to go gadget free for a week at every meal.

“We have a very young family, so meal time can be a long and drawn out process. As a result often the lure of social media or email can mean that gadget is used a bit more than perhaps it should be,” he said.

“Hopefully this challenge will show me just what I’m missing out on whether it’s at home or at work when I’m taking a break for a meal – and this time it’s a genuine break.”

The KFC Northmead store was chosen because of its high number of work mates who come in for lunch and the high family dinner and weekend trade.

“It’s not uncommon for us to see customers using personal devices in KFC restaurants when they’re sitting by themselves, but what’s surprising is we often see groups of people buy a meal together then not speak to each other as they’re too busy with their phones and tablets,” says KFC chief marketing officer Nikki Lawson.

“We’re hoping they will encourage Aussies to take a short break from technology, connect with one another and enjoy the simple things in life – like good food and great conversation.”

Answer your iPhone with the Moshi SenseCover without opening the cover