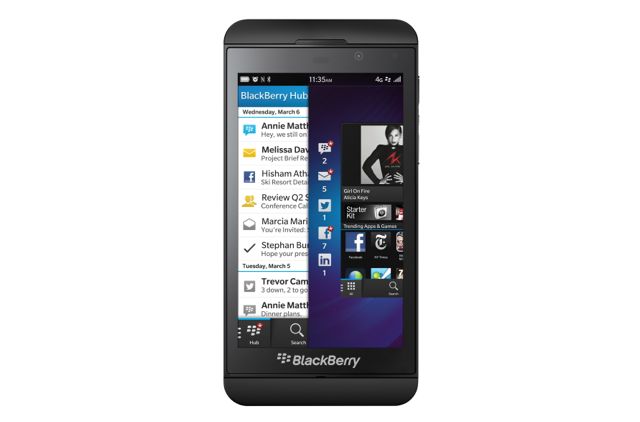 The new BlackBerry 10 operating system has been revealed along with two new devices running the software the company hopes will help claw back market share in the competitive smartphone market.

Research In Motion introduced BlackBerry 10 during a special event in New York along with the BlackBerry Z10 and Q10.

The Z10 has an impressive 4.2-inch screen with no buttons or virtual keys on the device. There is 16GB internal memory and an 8-megapixel camera on board.

The Q10 has a full QWERTY keyboard along with a 3.2-inch touchscreen.

The devices will be launched on Telstra and Optus 4G networks in March although no specific date was announced.

There are more than 72,000 apps ready to use in the BB10 platform with more to come in time for launch.

BlackBerry 10 is a much-needed re-invention of the company’s aging software which has finally been optimised for use with a touchscreen device.

The company also re-invented itself and will no longer be referred to as Research In Motion but simply as BlackBerry.

Previous attempts at a BlackBerry touchscreen device and operating systems – introduced to combat the relentless march of the iPhone a few years ago – were nothing short of dismal failures for Research In Motion.

Google’s entry into the market with the popular Android operating system which has been adopted by all of the major smartphone manufacturers including world No 1 Samsung, has also contributed to BlackBerry’s slide.

The new BlackBerry 10 operating system is a complete departure from previous versions of the software.

Even seasoned users of the BlackBerry will find the new software is like owning a brand new device.

Ironically it was just the move BlackBerry needed if it was to compete with the iPhone and Android.

The company is looking for increased adoption from both corporate and consumer users especially with the growing BYOD (bring your own device) trend in the workplace.

Tech Guide managed to get a hands on look at the software and the new BlackBerry Z10 device.

There is no home screen as such but rather a screen showing all of the open applications that can be engaged full screen with a simple touch.

There is no home or back button but rather gestures that can display the open apps or a “peeking” feature to show notifications and unopened emails without actually stopping what you’re doing.

Navigating the entire touchscreen Z10 is just a matter of swiping to your desired app or document.

BlackBerry Balance allows users to sort their work content from their personal content including separate email inboxes and apps screens.

One of the standout features of the BB10 operating system with the Z10 is the touchscreen keyboard.

The devices learns the type of words you use and even has a heat sensor to see how you strike the keyboard.

The BB10 keyboard has contextual predictive text and the next word the device thinks you may want to use appears on the first letter of that word on the keyboard and an upward flick on that key inserts that word into the sentence.

Words can also be deleted one at a time by swiping in from the right and the keyboard can be changed from letters to numbers to symbols with a downward swipe.

When taking images the device has a Time Shift mode that allows users to view a few seconds before and after the shutter activates to finalise the best version of the picture.

Stay tuned to Tech Guide for a complete review of the Z10 running the BB10 software in the coming weeks.