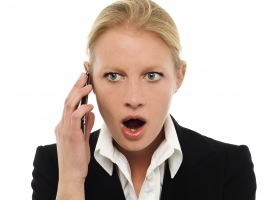 Despite the popularity of mobile cap plans, Australians are still being stung by bill shock according to a new study by Macquarie University.

The research, which was supported by budget mobile service provider Amaysim, shows that Australians are paying on average of $28 extra per month and cumulatively a staggering $557 million annually.

“Recent changes adopted by the industry since this bill analysis are a step in the right direction, but the bills we’ve viewed even in the past few weeks still left us scratching our heads,” says Dr David Gray, Senior Lecturer in Marketing from Macquarie University’s Faculty of Business and Economics, Department of Marketing and Management.

“Despite a concerted effort to change the composition of the bill and advertisements, it’s the concept of ‘included value’ in mobile plans that needs to be more clearly communicated to the consumer.

“This very big and real issue has still been left unaddressed by the industry.”

And according to the Macquarie University study, bill shock occurs across capped plans at several different price points.

With all of these figures taken into account the average price of a monthly mobile phone bill is $72.99.

Up to 40 per cent of mobile phone customers are affected by bill shock.

Female are also suffering more bill shock than men – 55 per cent to 45 per cent of men.

Rolf Hansen, founder and CEO of Amaysim said: “The popularity of mid-priced ‘included value’ plans would make you think they’re the best bet for consumers but the bills tell a different story.

“Even though these plans are advertised heavily by telcos and selected by consumers for budget management, they don’t reflect the reality of what people are forking out each month.

“This latest round of research proves that using more expensive plans as a mobile safety blanket doesn’t prevent bill shock.”

Amaysim’s approach is to allow customers to bring their own smartphones and pay for a SIM-only and its associated services only.

The operator’s capped plan model is to allow a customer to pay off the handset over two years as well as paying for access to the network.

By allowing the customer to BYO mobile, Amaysim can offer competitive plans including the $39.90 plan which includes unlimited calls, unlimited texts and 4GB of monthly data.