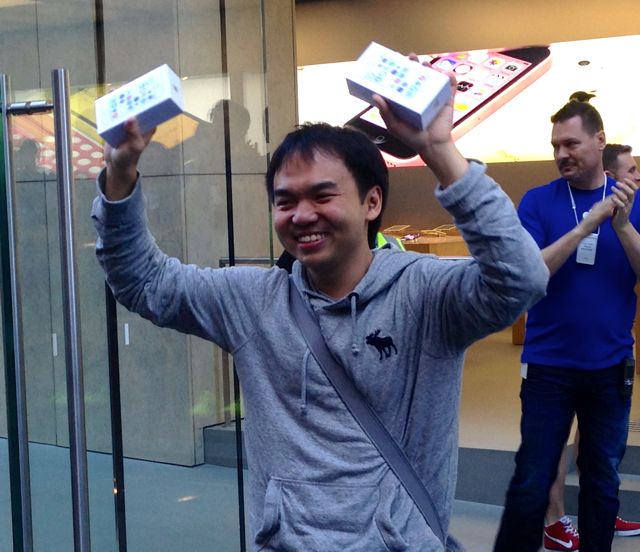 Yet again Apple has managed to draw a huge crowd for the iPhone 5S and iPhone 5C launch in Sydney – one of the first places in the world where they went on sale.

The queue wound its way from the Sydney Apple Store in George St, around the corner up King St and all way back up York St behind the store.

As usual, there were loud cheers not only from the customers in the line but also from within the store with the staff getting into the spirit of the occasion.

Sydneysider Jim Gunawan was the first customer in the long line. By the time the store’s doors swung open at 8am, he had spent 20 hours in the line.

“I want to be the first to get the iPhone 5S,” he told Tech Guide early today.

“It’s been a great experience and the other people in the line have been amazing.

“I lined up last year for the iPhone 5 but I was right at the back.”

Mr Gunawan says his main reason to buy the new iPhone 5S, despite already owning an iPhone 5, will be for the slow motion video capture capability.

“I’m an iPhoneographer and blogger and I love shooting videos,” he said.

“I wasn’t a big Apple fan until I used the iPad and it went from there.

“Now my phone and computer are both Apple.”

Similar lengthy lines have been reported at other Sydney Apple Stores in Bondi, Broadway and Penrith.

But it wasn’t just Apple Stores where customers were lining up to purchase the iPhone 5S and iPhone 5C.

The Telstra store opposite the Apple Store in George St also had a festive feel their launch with music playing until the 8am opening.

Optus and Vodafone city stores and stores within shopping centres were also inundated with customers seeking to be among the first customers to get their hands on the device before the rest of the world.

Australia was one of the first countries in the world to get hold of the iPhone because of the time difference.

Australia is in the first tier of countries where the iPhone 5S and iPhone 5C is being released along with the US, UK, Japan and Canada.