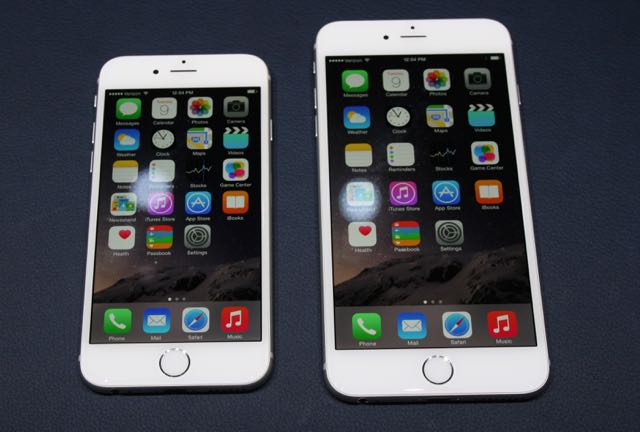 Apple has decided to go big with the two new iPhones – the iPhone 6 and iPhone 6 Plus – with sleek new designs and larger 4.7-inch and 5.5-inch screen sizes.

They will go on sale in Australia on September 19 at 8am.

For years the iPhone has been dwarfed by other devices in a market where larger screen smartphones are attracting more customers.

Apple CEO Tim Cook called it the “biggest advancement of the iPhone”.

The screens are packed with new technologies including Retina Display HD.

Apple has the largest and most popular ecosystem of apps and developers in the world and the larger screens will give existing and future apps an even bigger canvas.

Apps don’t even need to be updated for the larger iPhone screens as they will automatically scale to the larger display.

The larger screen now allows users to view the iPhones in landscape mode so your home screen, emails and messages can take advantage of the added space.

But the larger screen isn’t the only new feature of the new iPhones with the new iOS 8 operating system, a faster A8 processor, an improved camera and a more powerful battery.

Credit card details and personal information are secure and encrypted. It will work with MasterCard, Visa and American Express from launch.

To purchase a products users simple touch the iPhone 6 or iPhone 6 Plus to a terminal in the store.

The A8 processor has up to 25x faster performance and 50x faster than the original iPhone.

The faster processor will also power smoother graphics and games on the iPhone 6 and iPhone 6 Plus.

There is also an M8 motion processor on board to do things like estimate distances and elevation.

On the battery side the iPhones have new even higher capacity batteries for up to 11 hours of video playback.

The new cameras have 8-megapixel resolution with an added feature called Focus Pixels which is used by high end DSLR cameras and now focus twice as fast.

It also has noise reduction and tone mapping to ensure your pictures are higher quality.

Face detection has also been enhanced along with smile and blink detectors to help pick the best images.

Also on board is Optical Image Stabilisation to take the shakes out of your images and videos.

Shooting video with the iPhone 6 and iPhone 6 Plus produces full high definition videos of even higher quality at up to 60 frames per second.

Users can also take time-lapse photography which is part of the new iOS 8 operating system.

Onboard memory has also been expanded with the existing 16GB and 64GB capacities now joined by a new 128GB capacity.

The new iPhones will also have faster wi-fi connectivity with 802.11ac onboard that will be up to three times faster than the previous 802.11n standard.

The Touch ID fingerprint sensor introduced with the iPhone 5S is also included with the new 4.7-inch and 5.5-inch iPhones.

The iPhones will be offered in three colours – space grey, silver and gold.