Lenovo has reinvented the tablet once again with the launch of the Yoga Tab 3 Pro 10 at the IFA trade show in Berlin. It incorporates a projector that can beam up to a 70-inch picture on a screen or wall.

The Android 5.1 device has a 10.1-inch quad HD display and is powered by a Qualcomm Snapdragon quad-core 2.24Ghz Intel Atom X5-Z8500 processor with 2GB RAM.

On the audio side, the Yoga Tab 3 Pro 10 has a front facing soundbar which contains four JBL speakers complete with Dolby Atmos enhancement and 3D surround sound.

With quad HD resolution the screen looks sharp and bright for your web browsing, games, pictures and videos.

But with the built-in projector located in the rotatable hinge, whatever is on your screen can be enjoyed on a grander scale with a picture that’s up to 70-inches in size.

Now you can turn any dark room into a cinema and, with the projector located in the hinge, it is easy to position and enjoy. 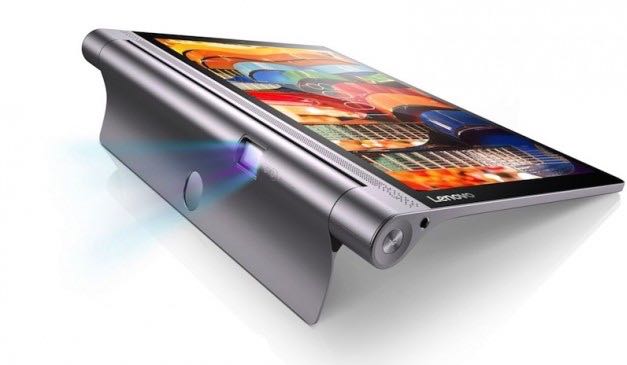 The previous model released in October last year was the first tablet to include a projector but it was positioned on the end of the barrel of the tablet’s handle.

This model has moved the projector to a better position on the hinge which was a 180 degree range of movement which makes set-up an absolute breeze.

You can aim the projector at a wall or screen or even up to the ceiling if you like to view your content while you’re lying down or in bed.

Focus can be adjusted from the tablet screen rather than with a manual control.

And with the JBL speakers on board you’ve also got the audio to match and complete the experience.

That hinge also comes in handy as a built stand, a typing stand, a nice grip to hold it and even to hang it.

Battery life is listed at 18 hours which is plenty of time to work or enjoy your content anywhere when you’re on the move and no where near a power point.

Lenovo has not announced pricing or a release date.

Stay tuned to Tech Guide for a complete review of the Lenovo Yoga Tag Pro 3.