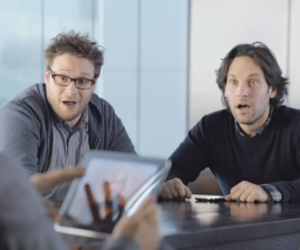 The Super Bowl is the biggest show in the NFL and also when a lot of clever new ads go to air including offerings from tech companies Samsung, BlackBerry and Go Pro.

Samsung’s ad about the Galaxy smartphones and tablets has comedy actors Seth Rogan and Paul Rudd pitching ideas for a new ad campaign but they can’t mention the Super Bowls or the teams that are playing.

In the 30 second spot from Go Pro, instead of attaching their versatile camera to a surfer, skier or motor cross rider – they decide to clip it to a baby with amazing results.

BlackBerry’s ad is centred on the new BB10 operating system and the new Z10 touchscreen device and has the sort of glitz and slickness associated with ads for Apple products.

This year’s ads include offerings from other major companies including Mercedes Benz, Coca Cola, Audi, Toyota, Budweiser and Taco Bell.

As one of the most watched television events in the world, the Super Bowl attracts lots of advertisers who are paying around $4 million for a 30 second ad.