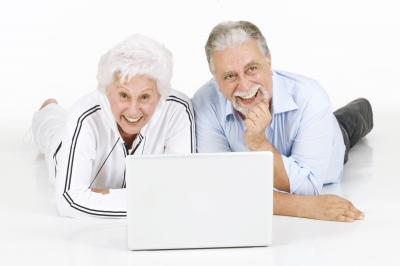 The notion that older Australians are technophobic has been shattered with new research showing more than 75 per cent of over 50s regularly use the internet.

The Life Begins at 50 report, commissioned by Apia – the leading insurance provider for over 50s – says “Silver Surfers” are on the rise with stats to back up the fact that internet usage doesn’t drop off with age.

Apia’s research shows that 60 per cent of those aged 65 or older are regularly getting online.

Silver Surfers are active users of the internet, the study shows, with 71 per cent of users over 50 shopping online, 71 per cent banking and paying bills online, 40 per cent using Skype and 40 per cent on Facebook.

Keeping up to date with loved ones is one of the main motivations getting older Australians to stay connected.

In fact, the report – based on a poll of 2060 Australians aged 50 and over – revealed 84 per cent of Australians over 50 think technology is making it easier for them to stay in touch.

“When we talk about over 50s in Australia, we are talking about a group of seven million people, so it is next to impossible to stereotype them,” says Grant Taylor, executive manager of Apia.

“But, this is the group that were in their 20s and 30s when computers became mainstream, the internet was born and vinyl was phased out.

“There’s no reason to doubt they will embrace new technology, just as they have been doing their entire life.

“Getting older does not mean living in the past, particularly not for today’s crop of over 50s.

“The rapid pace of change of technology can be overwhelming for people of any age, but nearly 90% over 50s say it’s important for them to keep up with these changes.”

Older retired Australians are finding they have more time on their hands to come to grips with the latest technology.

This group of Australians also has the time to plan and research things like holidays, their superannuation and insurance and are using the internet to do it.