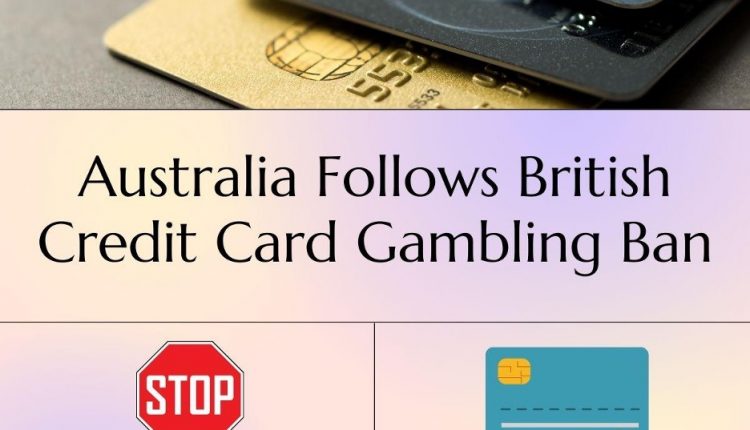 In order to stand against people being affected by credit card debts, due to gambling addiction, Australia took a step following the footsteps of the British Government in order to ban credit card usage while gambling offline.

This is similar to the United Kingdom Gambling Commission (UKGC) that imposed strict restrictions on the usage of Credit Cards at online casinos. This step was mostly taken to curb the pitfalls associated with addictive gambling. Additionally, the UKGC has policies such as Gamcare and Gamstop, which are traditionally used to impose self-exclusion from gambling.

After the MP of Queensland, Australia Andrew Wallace successfully accumulated the support of the top four Australian banks, the fact that credit card gambling in Australia is about to face a ban became way more obvious. Although the local gambling operators tried to justify that there is no such necessity for the smooth operation of the industry and the step is rather harsh, it was a long-awaited plan for Mr Wallace and it was just on hold for the lack of support.

This change was not favoured by Australia’s local gambling association needless to say, but the support from the leading banks helped Wallace solidify his plan. The current scenario depicts that using credit cards for gambling activities in casinos and in gaming lounges is banned all over Australia.

New Zealand is also following the example of Australia and Kiwi gamblers used to choose CasinoDeps low deposit sites with alternative payment methods. Additionally, no one can withdraw for the same purpose from nearby ATMs. But this is only restricted to offline wagering, while the online gambling sector remains free from such restrictions.

Wallace points out the problems of credit card wagering saying it is highly risky to be gambling on credit and also the lofty interest rate makes it even more dangerous for people to play using credit cards. In an interview, the MP previously mentioned the enthusiasm of the banks in order to work in favour of the government and he is interested in discussing the broader picture with his colleagues.

Some of the banks already supported by completely put a ban on credit wagerings like Suncorp and Macquarie. The proposal of Wallace to the banks contains urging them to form a code of conduct.

Two of the major outcomes of the credit card gambling ban in Australia are as follows:

According to the leaders, allowing customers to be in a state where they can voluntarily borrow money for credit will only lead them into facing more problems. The rate of interest is as high as 22% and taking money on credits for gambling is sure to lead them into bankruptcy. Kiwibank also introduced a gambling block feature. The ANZ gives a statement where they are in support of the legislative ban in the UK where the operators do not accept payments through credit cards. Moreover, the ABA stated that they would support the continuation of working with the government.

The Responsible Wagering Australia which is the lobby in support of Ladbrokes, Bet365, Sports bet, Neds, and other such major gambling operators hit back to the proposition claiming the lack of evidence to support the cause. The chief executive of RWA Brent Jackson came out about their opposition to the banning of credit card gambling declining the opinion of the government.

According to him, there is no valid reason to keep punters from opting for credit cards out of their choice. He said, “The only position we’ve seen to people using their credit card for online betting or to buy scratchies at their local newsagent is from people who have a moral opposition to gambling.” He added saying since online gambling is under the vigil of strict legislation, it created a safer environment compared to the other variants.

Although the MP Mr Wallace is willing to fight the betting companies online in relation to this opposition, he is assured of the change being in favour since most of the Australian citizens are in support of it. He is hopeful towards gambling operators taking a step with responsibility since people are exposed to using their debit cards to gamble.

It is important for leading associations and licensing agencies to come forward and contribute towards gambling awareness. Especially since addictive gambling has been spreading around like wildfire. While most tier-1 casinos and game manufacturers always promote responsible gambling, there are gambling forums that are less restrictive.

UKGC has been instrumental in launching several initiatives and collaborations with football clubs, banks, and other sports foundations to mindfully channel gambling endorsements and merchandise which might promote gambling across the underaged youth. The Australian government is also playing its part in such initiatives in recent times.

How to prevent gambling harm