Samsung’s recall and eventual cancellation of the Galaxy Note7 was well documented but for the first time the company has revealed what happened inside its headquarters as they dealt with the crisis.

Tech Guide was at the Samsung HQ in Seoul recently to take a look inside the walls of the electronics giant’s Suwon campus – home to more than 30,000 employees.

While we were there we had the opportunity to chat with Pio Schunker – head of global marketing for Samsung Mobile – who took us through how Samsung had to rebuild its brand reputation and win back customer trust after the Note7 battery issue.

“The biggest challenge was the period of not knowing what had happened and trying to find out the cause, that was properly the most worrisome time,” Schunker told Tech Guide.

“And during that period of uncertainty there was obviously concern we might not be able to solve that.”

The Note7 was recalled twice after customers reported devices were overheating, emitting smoke and bursting into flames before Samsung made the tough decision to kill the product.

Before disaster struck, Samsung was right in the middle of a brand campaign to communicate the values of the company through its products.

“One of the biggest things we needed to do as an engineering company is to stop talking about the feeds and the speeds and looking at product form but to actually talk about how the product was relevant in a consumer’s life,” Schunker said.

“This company started from humble beginnings as a grocery store back in the 1930s during incredibly difficult economic times, created in large part to help fellow countrymen be employed and fed. 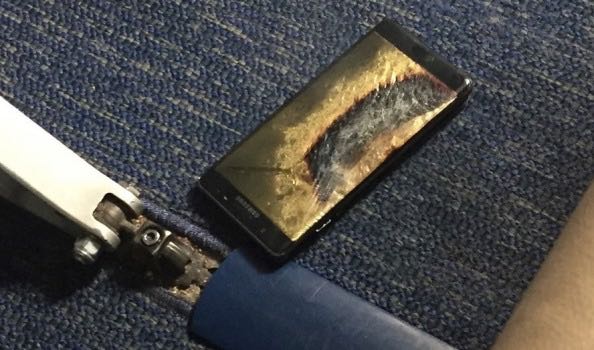 “The philosophy of that company was a mindset of working for the benefit of the country, the people and eventually, mankind – an incredibly ambitious and humane philosophy.”

Schunker says it was the company’s philosophy that allowed Samsung to get through the most difficult crisis in its history with the Note7.

“We knew that in a company that actually favours action and not just introspection, we just couldn’t curl up in a foetal position and not take action,” he said

“We had to move. The first thing we want to do in order to make things right was to take accountability.

“We absolutely loved the Note7 and thought it was a technical marvel and as much as it hurt to remove it – it wasn’t just the right thing to do it was the only thing to do.

“But at the point of the recall we actually didn’t know what was wrong.”

Schunker revealed Samsung employed 700 researchers, used 200,000 phones and tested 30,000 batteries over a period of months to get to the bottom of the problem.

“We even opened ourselves as a company to third-party audits to make sure in the spirit of complete transparency that we were reporting accurate information,” he said.

“That was a decision senior management made from day one that if we were ever going to recover our consumers trust that we had to be absolutely transparent with them and that was a really strict standard that we held ourselves to.

“And once we understood what had gone wrong and that we could fix it moving forward to our satisfaction and to consumer satisfaction, we made good on our promise to go back out and talk to our consumers.”

After an exhaustive press conference in January where Samsung and two independent audit companies revealed their findings about the battery issues, the company kicked off the eight-point battery check and a campaign about its focus on quality and innovation.

Samsung had to recover lost ground and re-establish itself as a brand in time for the Galaxy S8 launch in March.

“From the absolute low of the recall in Q4 2016 to the Q1 2017 rebuild through the press announcement and the quality reassurance program that we launched and then through the launch of S8 and Note8 we saw consumer sentiment recover to almost the pre-Note7 levels which has been an incredible recovery.”

Schunker says the S8 launch was the most integrated and cohesive smartphone launch in the company’s history.

“What was great about this wasn’t just the sales but what I really think it helped to do for us was to show people that we were back,” he told Tech Guide.

And when it was time for the Note8 launch earlier this year, Samsung knew it would become one of the most scrutinised event ever.

“We were incredibly proud in New York to give our fan base everything they’d looked for and then some,” Schunker said.

“One of the first things that we did, was that we wanted to thank our incredibly loyal Note users.

“We owed our Note users as a massive thank you for their loyalty because in today’s world if you want to be a meaningful brand you have to be bold and confident but also incredibly humble and human and that’s all been striving towards over the last three years.

“This is the journey we’ve been on and I can’t stress enough that it is a journey and we look forward to where we are going to take it next.”

* Stephen Fenech travelled to South Korea as a guest of Samsung