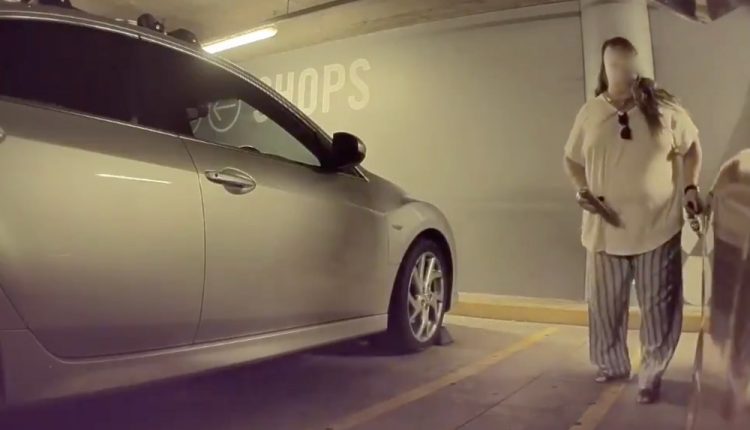 Footage of a woman keying a Tesla Model 3 at the Penrith Westfield shopping centre captured with the car’s Sentry Mode has gone viral. But you don’t need to drive a Tesla to have that level of protection for your vehicle.

I am a Tesla driver and the minute I saw this footage I decided to set up Sentry Mode in my Model S.

Sentry Mode was a feature added to Tesla vehicles with a software update after Tesla had the bright idea of getting the numerous cameras around the car usually used for parking, driving and autopilot to capture video while the car was parked.

Tesla also made it possible for the front facing cameras located near the rear view mirrors to also be used as a dashcam.

To set up Sentry Mode and Dashcam I had to format a USB drive to FAT32 and create a base level folder on the drive called TeslaCam.

Some drivers use a USB flash drive for this but I decided to go all out.

Instead I formatted a 500GB Samsung T5 SSD drive to FAT32 and connected it with a cable to one of the two front USB ports.

After diving into the car’s settings I was able to activate Sentry Mode and Dashcam which was symbolised with a camera icon at the top of the screen.

In the settings I also specified the Sentry Mode would not be needed while my car was parked safely in my home’s driveway. 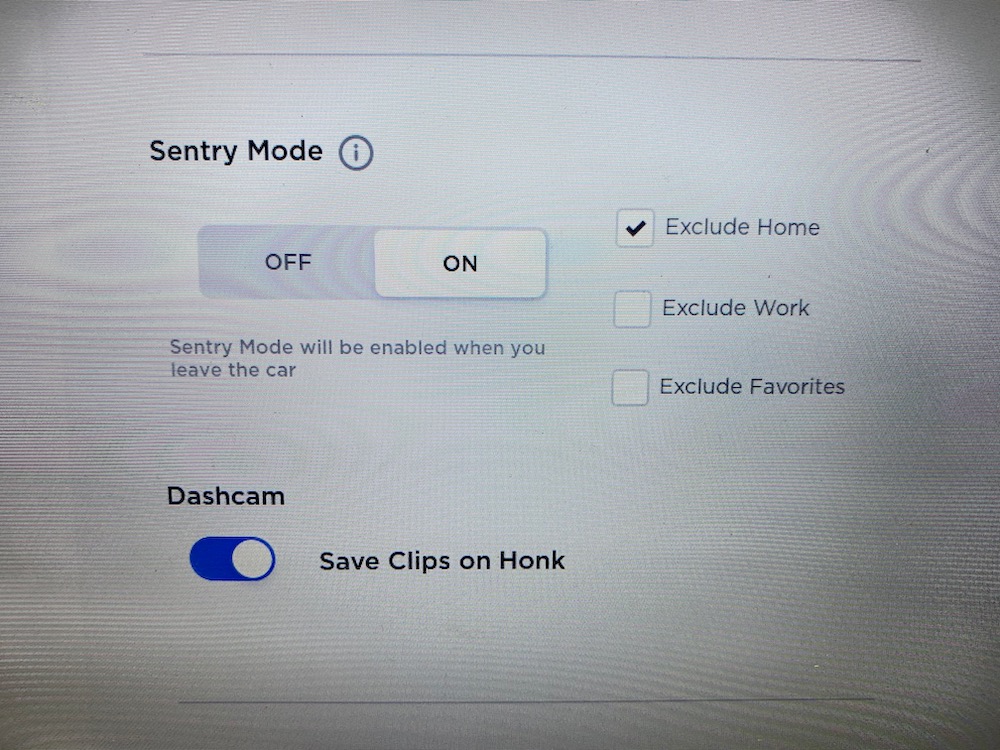 But everywhere else where my car is parked and unattended, Sentry Mode is keeping an eye on things.

And while I’m driving the front cameras are also recording loops which can be viewed directly from my SSD drive on a computer.

There is even a new feature that allows Tesla drivers to initiate a dash cam recording every time they honk their horn. 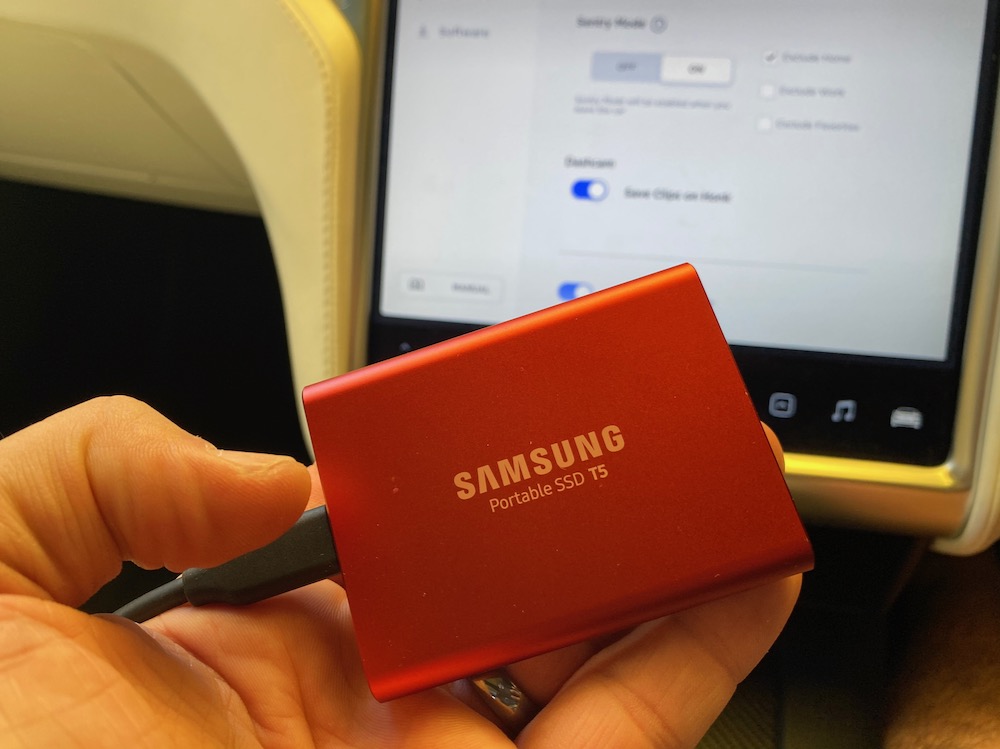 I already have the Blackvue DR900S which has a front 4K dash cam and also a rear full HD camera.

This unit also has parking mode and, because it is hard-wired in the car and constantly powered by the Tesla’s huge battery, it can capture video even while the car is parked.

But Sentry Mode takes that a step further and provides a 360-degree view of your car using the front cameras and left and right cameras aiming back along the sides of the car.

If you want a similar level of protection you can achieve it with a dash cam.

Most of the latest models including the Uniden Dash View 30R are capable of being hardwired in your car to allow parking mode which means the cameras will capture footage if it detects force or motion while parked.

So if someone vandalises your car or backs into your vehicle without leaving a note, you now have clear video evidence which can be presented to the police.

There are also numerous dash cam models that have both front and rear cameras. 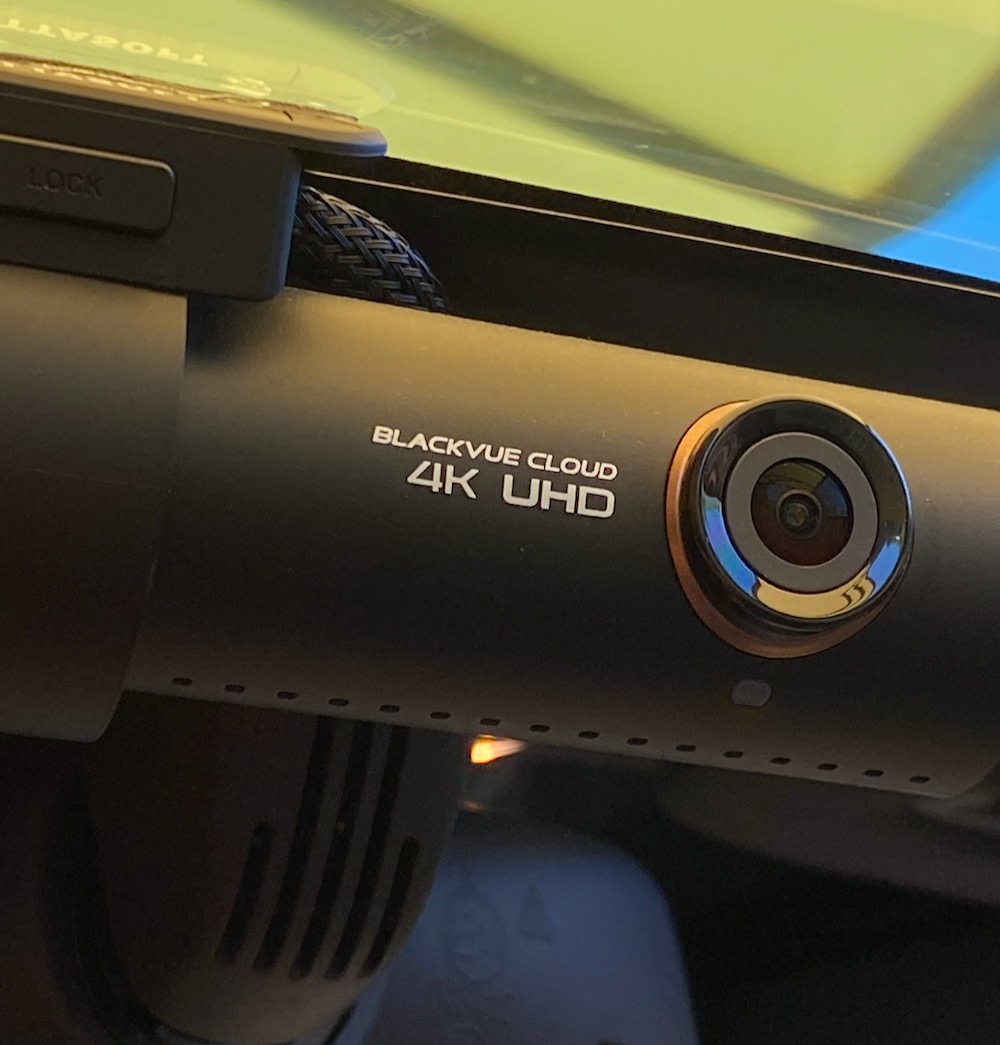 The main use obviously is to be your eyes and ears on the road in the event of an accident with the video able to be used in an insurance claim or to file a police report.

But in parking mode the front and rear cameras can provide decent coverage so if someone damages your car you are likely have video footage of the incident.