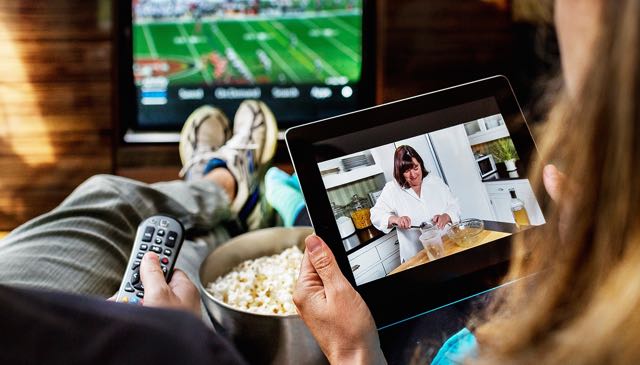 Our TV viewing habits have certainly evolved in the last few years with new research showing viewers watch their favourite programs across a number of devices.

The annual Yahoo7 Companion TV Survey interviewed more than 1,000 Australians online and showed that almost one in four (24 per cent) watch their shows across multiple products – a seven per cent jump from 2013.

And it’s the 16-34 age group that is leading the charge with one in two (52 per cent) regularly watching TV using a laptop, tablet, smartphone and gaming consoles. This is a 17 per cent jump since 2013.

While the TV is still located in our lounge rooms 53 per cent of respondents say they regularly use their mobile devices to view anywhere in the home as well as on the go.

“We are committed to delivering the best in digital viewing experiences for users when, where and how they want,” says Caroline Casey, director of product and audience at Yahoo7.

“The survey results give us a deeper insight into audience viewing habits when watching and interacting with TV, enabling us to provide the best user experience possible.

“The findings mirror real-life results we saw during The Australian Open via our 7Sport app.

“Viewers are craving services that offer them coverage whenever they want and wherever they are.”

We’re also using our smartphones and devices as a second screen when we are actually in front of the TV with 74 per cent searching for facts on the program.

Here are some of the stats from the Yahoo7 Companion TV Survey:

* 16-34 year olds are viewing content across a number of devices including:

* PLUS7 was the most popular commercial FTA service with 62 per cent of respondents using the service to catch up on their favourite TV shows.

* 7 in 10 watch TV with their mobile by their side, while 57 per cent have their laptop on-hand and 44 per cent with their tablet.