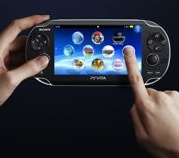 Sony is convinced its new PlayStation Vita portable gaming device will find an audience despite the popularity of Apple’s iPhone, iPod Touch and other smartphones in the mobile gaming market.

The PS Vita has a 5-inch OLED touchscreen, dedicated controls, dual analog sticks, shoulder buttons and a rear touch panel and will be available in wi-fi only and 3G/wi-fi models.

With the explosion of touchscreen games available for the iPod Touch, iPhone and also the iPad, Sony Computer Entertainment’s marketing manager Patrick Lagana says PS Vita provides a mobile gaming experience like no other.

“If the user wants an uncompromised gaming experience there’s only really one choice and that’s the PlayStation Vita,” he said.

“It does provide the gamer with an immersive experience and also controls that none of the other mobile devices can.”

Interestingly the device will only be sold through dedicated gaming stores and major electrical retailers with stores like Kmart, Big W and Target left out of the initial launch, Tech Guide has learned.

Lagana says the device is aimed at the dedicated gamer.

“The audience for Vita is the active gamer – these are the guys who appreciate gaming and who are really demanding a high quality uncompromising gaming experience that no other mobile device offers at the moment,” he said.

“It’s for those gamers who own a console and then want to continue that experience when they leave home to go to work or commute to uni.

“For us it really is for those gamers who want an uncompromised gaming experience.”

“Once people play around with the product and experience it first hand they will see the value in the price we’ve set the Vita because it really does wow the user in the way players can interact with the game,” he said.

“If they see it and experience it they will see it’s worth every penny.”

One thing that will appeal to the dedicated gamer is the inclusion of the dual analog sticks which will open up the possibility of playing popular first person shooters on the Vita on the go.

Activision has already confirmed it is preparing the hugely popular Call of Duty franchise for the Vita with Sony’s own FPS (first person shooter) Resistance also being prepared for the powerful portable device.

And Lagana says anyone who thinks the Vita is just a glorified PSP will be mistaken.

“Once the customers experience it first hand they will see that it is very different from the PSP,” he said.

“Once they engage with it and play the games that utilise the features they will be able to see it easily for themselves.”

Connectivity is also shaping up as the PS Vita’s standout feature with wi-fi and 3G linking players to each other and to their PS3 console.

CrossPlay is one feature which will allow players to compete online in some games against other Vita and PS3 players at the same time through the PlayStation Network which can bind the two systems together.

There will also be some digital titles which can be purchased from the PlayStation Store that will include the PS3 version as well as the Vita version.

“Players will also see the interoperability between the Vita and the PS3 is really strong and quite compelling and offers some unique experiences that we haven’t seen in a game before,” Lagana said.

Tech Guide’s full review of the PlayStation Vita will be published tomorrow.