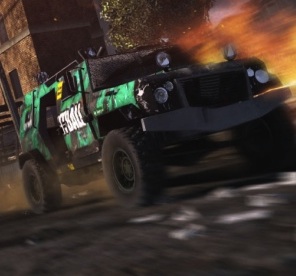 Sony delays game out of respect for Japan quake victims

Sony Australia has halted the distribution of its new PlayStation 3 game MotorStorm Apocalypse out of respect for the victims of the Japanese earthquake and tsunami.

The racing action game is a set in a major metropolitan city devastated by a gigantic earthquake.

The company had already delayed the game’s release in New Zealand indefinitely after the Christchurch quake.

Sony, a Japanese company which has been directly affected by the tragic events, has also pulled the plug on the game’s ambitious advertising campaign.

The game had already shipped to Australian stores in preparation for its March 17 release before the quake and tsunami struck Japan.

Customers can actually buy the game now but Sony has confirmed it will not be shipping any new stock for the time being.

The game was halted in time before for the UK release and, of course, delayed in Japan for the same reason.

“Further to the recent events in Christchurch, New Zealand, we are shocked and saddened to see the impact of the earthquake and tsunami in Japan and our thoughts are with all those affected.

“We are very conscious of the underlying theme in MotorStorm and are doing everything we can to be as sensitive as possible to the situation. A number of steps have already taken immediate effect including the delay in distribution of the product in New Zealand.

“In Australia, the game is already in distribution, however we are ceasing any further shipments and have pulled the total marketing launch campaign in consideration of both of these recent tragic events.”

The game, set amid the ruins of a major city after an earthquake, features races in a variety of vehicles around the devastated streets.

Tremors and aftershocks in real-time during races can quickly change the landscape so drivers have to make quick decisions.

In dealing with this unfortunate situation, Sony Australia has acted immediately and appropriately with respect and care.

Fingers really do the walking with Yellow Pages on iPad