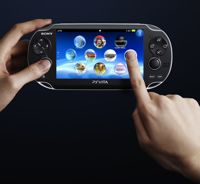 If you were hoping to find Sony’s upcoming portable gaming device – the PlayStation Vita – under the Christmas tree this year we’ve got some bad news.

Sony’s executive deputy president Kaz Harai told reporters in Tokyo this week the device will miss the holiday season in the US, Europe and Australia and ship in early 2012.

Bloomberg says Sony had previously planned a phased global rollout of the PlayStation Vita but this latest news means the company will miss holiday sales in major markets like the US and Europe as well as here in Australia.

Pricing of the PlayStation Vita has not been announced yet but it has been put under pressure following the dramatic price reduction of rival product the Nintendo 3DS.

The PlayStation Vita was unveiled early this year and features a 5-inch touchscreen, front and rear camera, built-in GPS and wi-fi.

There are left and right control sticks and the usual PlayStation square, triangle, circle and cross buttons plus a touch pad for interaction in the games in an entirely different way.

More details of the PlayStation Vita can be found here.