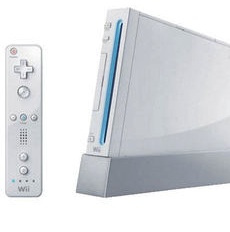 Nintendo has confirmed it will release the next version of its popular Wii console in 2012.

There were no details of the device announced but the company says a working version of the device will be unveiled at this year’s Electronic Entertainment Expo.

The Wii was a hit when it was released in late 2006 but Nintendo says sales slumped in the fiscal year which ended on March 31.

Speculation has already begun ahead of the highly anticipated reveal at E3 in Los Angeles in June.

With the PS3 and Xbox 360 already embracing high definition, it’s a good bet the unnamed new Wii console – which we will call the Wii 2 – will also offer HD resolution.

The Wii 2 is sure to maintain the movement sensitive interface but, in keeping with its usual approach, gameplay and fun will remain a priority over boasts of increased hardware strength and speed.

There are also rumours the controllers of the new Wii 2 will feature their own touchscreen.

3D may also play a part in the Wii 2’s gameplay.

Nintendo will no doubt make the new console backwards compatible with the original Wii and probably redesign the user interface to appeal to older and more hardcore gamers who view the Wii as a child’s plaything.

All will be revealed at the Electronic Entertainment Expo which begins in Los Angeles on June 6.

Sony unveils S1 and S2 tablets to take on iPad