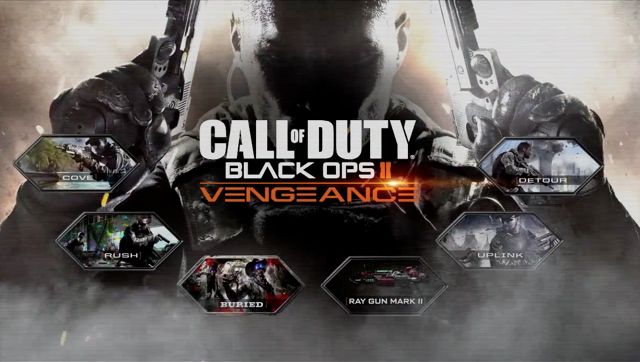 Call of Duty Black Ops II fans get ready for even more blazing multiplayer action with the new Vengeance map pack which will arrive on July 2.

This is the third downloadable content pack and includes four new multiplayer maps and an all-new Zombies experience.

The pack will be available for Xbox players first on July 2 with PlayStation players following a month later.

The new maps offer widely different experiences and locations to test even the most skilful Call of Duty online players.

Action is set in a destroyed suspension bridge above a waterway on multiple levels with scattered cars and head to head combat for up close and mid to long range engagement.

Players find themselves on a small island in the Indian Ocean among the wreckage of a jet that crashed in the middle of a smuggling operation with natural rock formations and trees creating a tight battleground.

Set in a paintball arena with various set-ups inside the location for close quarters combat where bullets have replaced the paintballs and players have to use all of their skills to outflank the enemy.

Fans of the original Call of Duty Black Ops game will recognise Uplink as a re-imagining of the Summit map that takes places inside a hi-tech facility located on a mountaintop above the rain-soaked forests of Myanmar.

Call of Duty Zombie fans can sink their teeth into this new map which is set in a spooky underground Old West mining town and with a new weapon – the Ray Gun Mark II.

The Vengeance map pack for Call of Duty Black Ops II will be available from July 2 for Xbox players.