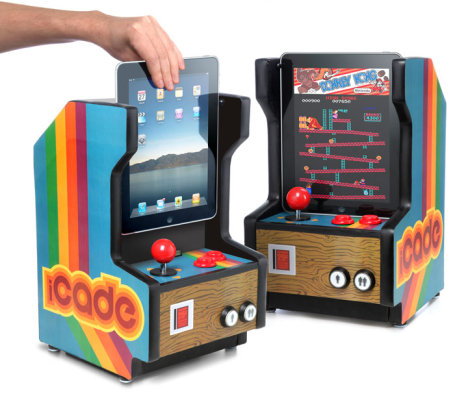 How to turn iPad into an 80s arcade machine

Mark this one down as a must have for fans of the retro arcade games.

The iCade is a specially built cabinet with a dock to hold the iPad and convert it into an arcade machine complete with joystick and eight buttons.

The cradle inside the cabinet places the iPad at the ideal viewing angle with support for any iCade compatible apps.

These will include arcade classic Asteroids to begin with among a long line of other titles to take players back to their glory computer gaming days on the 80s.

The authentic arcade controls connect to the device through Bluetooth.

What’s funny is the product was the result of an April Fool’s Day gag thought up by tech site ThinkGeek.

Fred Galpern, gaming product manager for distributor Ion, saw the imaginary product on the site and took it to his bosses to see if they could make it.

The result was an agreement between ThinkGeek and Ion to turn the fictional device into reality and iCade was the result.

Expect to see the iCade in Australia around April. It will sell for $100 in the US and hopefully not too much more in Australia.