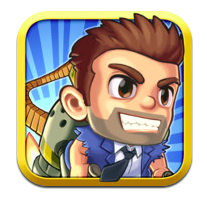 Australian app developer Halfbrick has been awarded a design award by Apple at the Worldwide Developers Conference for its popular game Jetpack Joyride.

The Australian-designed game was recognised as one of the best games of the year that, according to Apple, “set new standards that inspire us all”.

Jetpack Joyride has been downloaded more than 25 million times and was designed by Halfbrick’s Luke Muscat.

It is an addictive side-scrolling game with players steering their character with a selection of cool jetpacks.

The game was selected for an Apple Design Award because it uses iOS graphics and audio frameworks extensively to enable fun graphics. It has also been optimised for Retina Display on the iPhone and the new iPad.

Jetpack Joyride is the follow-up to Halfbrick’s hugely successful Fruit Ninja gaming app for iPhone and iPad which has been downloaded more than 300 million times.

“Just weeks ago we celebrated the two-year anniversary of Fruit Ninja with a national street tour.

“WWDC is always a huge event, with the world’s media focusing their attention to Apple’s announcements.

“To win this design award is something our entire team will be celebrating in our Brisbane headquarters. It’s a prestigious award they’ve been giving out since 1997 and one we’re very proud to win.

“Most importantly, we’re showing the world what Australian ingenuity and creativity can achieve.

“We’re always working on great apps and games at Halfbrick, so stay tuned for lots more from us in 2012!”