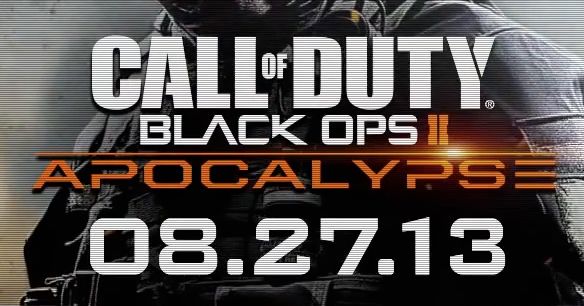 Set for release on August 27 for Xbox Live users and a month later for PlayStation 3, Apocalypse has two all-new maps, two re-imagined maps and a new Zombies experience.

This will be the last offering of downloadable content for the Black Ops.

The new multiplayer maps are:

Set in a failed Utopian community from the 70s where players have to navigate through run-down residential pods built into an abandoned cliff side in Taiwan. Players can move through, around and on top of these pods for some frenetic gameplay.

Players find themselves in Amsterdam following a heavy snow fall where a bridge and frozen river separate the two halves of the city.

Modelled after the Stadium map from the original Black Ops multiplayer game, Takeoff is set in a top secret launch site located on a small island in the Pacific Ocean and offers tight close quarters combat.

This map was inspired from the original Courtyard map in Call of Duty World At War and is set in two archaeological dig sites in Afghanistan with two major chokepoints for confrontational play and raised platforms for a more strategic approach.

This all-new Zombies experience goes back to where it all began in World War I France where you will see the return of the four original heroes from the very first Zombies as well as, of course, hordes of Zombies.

“It is the perfect culmination of our efforts, and fan feedback, with two all-new multiplayer maps for players to experience for the first time, and two fully reimagined fan-favourite multiplayer maps from past games – and Origins, our most epic Zombies experience to date.

“Apocalypse is a DLC pack that our fans will never forget.”

Call of Duty Black Ops II Apocalypse is available for download through Xbox Live on August 27 and for the PlayStation 3 in late September.