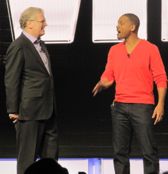 The Consumer Electronics Show had a taste of Hollywood with stars making guest appearances during the pre-show press day.

Meanwhile Will Smith added his star power to the Sony press event when he was introduced to talk about his upcoming Sony Pictures film Men In Black 3.

MySpaceTV is result of a partnership between Panasonic and MySpace – an app for Panasonic’s Viera TVs which will allow users to chat live onscreen during their favourite shows and sporting events.

“Why talk and text your friends to talk about your favourite program after it has aired when you could be sharing that experience with real time interactivity from anywhere across the globe?” Timberlake asked the audience.

Panasonic also announced a partnership with NBC to broadcast the London 2012 Olympics – a fact which will be well received by the many customers around the world who have invested, or thinking of investing, in a 3D TV.

Over at Sony, Will Smith and director Barry Sonnenfeld were introduced to the gathered press by Sony CEO Sir Howard Stringer to talk about their upcoming film Men In Black 3.

Smith jokingly thanked Stringer for paying for the movie before the Sony boss shot back with: “I hope you can help us get it all back again”.

Sony’s focus for the press conference was focussed on the big picture and the ability offer not only good products but also services, content and connectivity to make them all work together.

Part of that solution was a new service called PlayMemories which can share images to your computer, tablet, smartphone and smart TV in much the same way as PhotoStream does with Apple’s iCloud service.