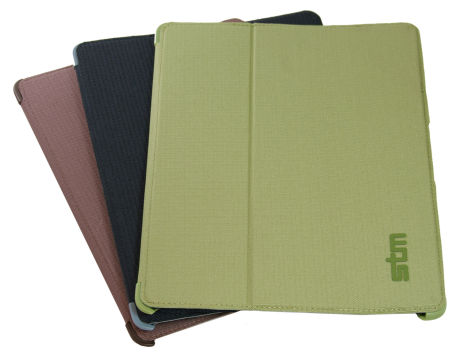 Get ready for a flood of iPad 2 cases

With the release of any new Apple product there is usually a flood of third party accessories and covers and the iPad 2 is no exception.

The magnets and sensors which are utilised by Apple to attach the Smart Cover to wake and sleep the device will also be used by case makers.

These new products also have to take in to account the iPad 2’s front and rear facing cameras as well as its slim new form factor.

iPad 2 sold out within hours across Australia

iPad 2 pricing cheaper than the original

The Miniot Cover is made out of a single piece of wood with indentations to allow it to be bent and folded to a stand.

Miniot’s cover, with its micro-fibre lining, attaches to the glass surface of the iPad 2 with an array of magnets.

Made in Holland, the Miniot Cover will be available in Australia next month.

The Joy Factory will be releasing an the leather Folio 360 II which has a wake/sleep cover so it can not only protect the device but also provide a stand for typing, watching videos and making FaceTime video calls.

The company will also be launching the SmartBlazer 2, also crafted out of leather,  which has a magnetic wake/sleep cover which can be folded and used as a stand.

STM is an Australian company which has been making excellent bags and cases for Apple products for years and they’ve already come up with a solutiom for the iPad 2.

It has an auto on and off cover to wake the iPad 2 when it is opened and put it back to sleep again when it is closed.

This cover also folds to provide stands for typing and viewing.

All of the ports and cameras are also completely accessible while the iPad 2 rests inside the Skinny.

It is available in three colours – sage, mushroom and black.

If you’re after a touch of luxury for your iPad 2 then you can’t go past Hermes which has just released a calfskin leather cover which is actually more expensive than the device itself.

It is available in 10 different colours and is a book-style cover which can protect the screen and also fold back to provide a stand.

iPhone 5 may be unveiled on June 6 at WWDC11