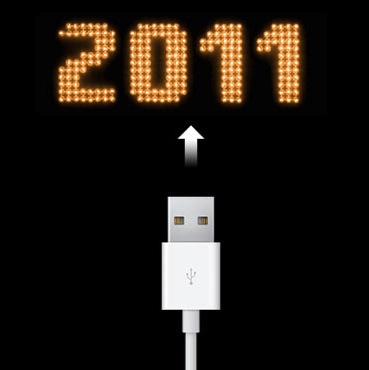 the year in tech

2011 was a huge year in the tech world. There were a lot of successes and a lot of failures, a lot of innovation and a lot of changes.

There were products we loved and products we hated, some new ways of doing things and also events which were both joyous and sad.

Tech Guide takes a look back at the tech events, products and innovations that shaped 2011 into a truly memorable year.

Year of the tablet

The introduction of the iPad in 2010 was the snowball that created an avalanche.

A number of companies spent 2010 and the early part of 2011 regrouping to try and catch up with the iPad which was like a runaway train.

But by the time a lot of other companies released their answer to Apple’s hugely successful touchscreen device, Apple released the iPad 2 – less than a year after the original – and kicks away from the competition yet again.

There were some admirable competitors – the Motorola Xoom, the Acer Iconia, Samsung’s Galaxy Tab 10.1V and Sony’s Tablet S. But all of these products were playing for second as the iPad 2 continued to dominate.

Apple even took Samsung to court to block the sale of their latest Galaxy Tab after it alleged patent infringements. Apple’s bid failed the Samsung device went on sale in early December.

The result was that the tablets became a highly sought-after consumer products. Forget the netbook – it was the year of the tablet. And in 2012 we’ll be seeing more of the same.

The company also released the latest version of OS X – Lion – and also delivered iOS5 for the iPhone, iPad and iPod Touch.

The iPad 2 demonstrated just how much Apple could improve a product in less than a year. The new iPad was faster, thinner and lighter and now had a front and back camera.

Ailing CEO Steve Jobs surprised everyone when he took the stage in San Francisco to launch the device as only he could.

Speculation would reach fever pitch later in the year about the new iPhone which everyone expected in July. When it didn’t materialise the rumour mill went into over drive.

Jobs’ health, meanwhile, continued to nosedive and in August he handed in his resignation as CEO but stayed on as chairman of the board.

On October 4 new CEO Tim Cook took the stage at the highly-anticipated iPhone event but many were left disappointed when the iPhone 4S was unveiled instead of the iPhone 5.

The new device had a faster processor, a vastly improved camera and Siri – a voice controlled assistant. And it went on to sell four million units in the first three days.

But the day after the iPhone 4S launch, on October 5, Steve Jobs lost his battle with cancer and passed away.

The outpouring of grief for the man who has changed the world we live in with the products he created was extraordinary.

Apple Stores turned to shrines with customers laying floral tributes and lighting candles in his memory.

3D in the palm of your hand – without glasses

Nintendo updated the already popular DS handheld console early in 2011 to the 3DS which allowed player to view 3D images without glasses.

3D was huge in 2010 with the introduction of 3D TVs and the fanfare that went along with it including 3D rugby league State of Origin and 3D matched in the soccer World Cup.

Nintendo decided to run with 3D on the 3DS and developers climbed on board with many games and established franchises embracing the new format.

But handheld 3D wasn’t limited to the 3DS. There were also a couple of 3D smartphones as well.

The LG 3D Optimus and the HTC Evo 3D offered a similar glassless 3D viewing experience and, like the 3DS, also made it possible to shoot 3D pictures and 3D video.

While these products enjoyed limited success (Nintendo slashed the price of the 3DS to jumpstart sales) 3D was still an add-on feature for most rather than the main feature.

Late in the year there was a 3D resurgence with more 3D movies being released on Blu-ray, including a range of 3D titles from entertainment giant Disney.

Rise of the smartphone – and Android

Android went from being a new and exciting mobile operating system to a powerhouse in less than 18 months.

2011 coincided with Android’s fastest growth thanks to a number of exciting handsets like the Samsung Galaxy S II, Sony Ericsson’s Xperia Arc, Motorola Razr and the Galaxy Nexus.

Nokia – which was struggling to stay in the smartphone race – decided to partner with Microsoft and run Windows Phone 7 on its next generation of smartphones.

The first have already been released in Europe and will be launched worldwide in early 2012.

Android was not only a force in smartphones it was also front and centre on tablet devices as well.

Android is shaping up to be for smartphones and tablets what Windows is for computers – the alternative software to Apple that is open to any manufacturer who wants to build a product to run it.

Android’s latest version – 4.0 otherwise known as Ice Cream Sandwich – was introduced recently with the Galaxy Nexus which was the device created between Samsung and Google.

Next year Android 4.0 will roll out to many new smartphones and tablets.

The early part of 2011 was disastrous for Sony.

Six of the company’s manufacturing facilities were closed after the Japanese earthquake off Honshu and the subsequent devastating tsunami in March.

Just over a month later Sony would be dealt another blow – this time a man-made disaster.

Its PlayStation Network has been hacked and the information of more than 75 million members, including credit card details and password, had been compromised.

This “external intrusion” – as Sony called the breach – would take nearly a month to repair leaving angry players unable to play their favourite games online.

Sony pressed on in 2011 and unveiled the new PlayStation Vita portable gaming console, a range of Bravia Smart TVs and the Tablet S.

From Idiot Box to Smart TV

Back in January at the annual Consumer Electronics Show the theme was obvious. Our TVs would no longer just be an overgrown monitor.

Instead these even thinner panels would now be connected devices and a gateway to even more content.

They could not only connect to the internet but also to the other devices within our home networks to make it even easier to share and enjoy our own content in the highest quality.

Not only were there access to services and content there were also apps to be enjoyed on the large screen as well as a web browser to access our favourite sites and social networks.

Gaming on the move

Nintendo with the Wii introduced motion sensitive controllers years ago but Sony and Microsoft have also ventured down this path with their respective PlayStation 3 and Xbox 360.

Microsoft introduced Kinect late last year for the Xbox 360 and it went on to set a record as the fastest selling consumer electronics device.

The device allows players to use their bodies as a controller and opens up a whole new genre of gaming.

Recently the Kinect system was updated even further to allow users to control their Xbox 360 with their voices.

Over at Sony the Move has allowed players to interact with games like never before.

Suddenly a whole range of sports and exercise games were now possible.

Both the Move and the Kinect also went on to become a tool for the latest genre – dancing games.

But that’s not to say more the regular games and popular franchises didn’t see huge success,

The latest Call of Duty instalment Modern Warfare 3 achieved $1b in sales in just 16 days.

Head in the clouds

The cloud had a big year – it went from being the fluffy white things that float in the sky to being known by consumers as a place to store and access your stuff online.

Apple’s iCloud service was an excellent example where users could access their content and apps from any of their devices.

For Apple it meant that any of their customers with multiple Apple products can see their latest photos, all of their music and apps no matter what product they were using.

No more attaching each device to your computer with a cable to sync manually. It was in iCloud.

There are a number of companies now offering cloud storage as well as streaming content from the cloud.

Tablets were also a popular way for customers to read their books and magazines but it was the dedicated eReader which a huge surge in 2011.

Amazon updated its line of Kindle eReaders with a range of new models including a smaller version, touchscreen 3G model – Kindle Touch – and a 7-inch colour version – the Kindle Fire.

The Kindle Fire, which is yet to be released in Australia, is priced at only $US199 and actually sold at a loss by Amazon with the expectation customers will more than make up the difference with sales of content.

These products would be yet another nail in the print coffin.

Amazon announced in May that Kindle ebook sales had overtaken print sales for the first time.

Sony also announced its updated Reader along with Kobo making 2011 a real transition year where users were deciding to buy ebooks over print.

Create your own Hollywood action scene with new app