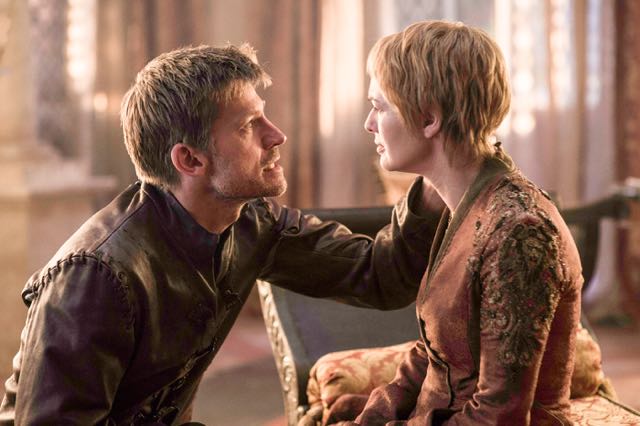 Foxtel Now has fallen victim to its most popular show Game of Thrones as eager fans desperate to watch the first episode of the Season 7 brought the streaming service to a standstill.

In this statement at 11PM, Foxtel said Game of Thrones had caused technical glitches around the world with online sites in the US, Latin America and Australia being forced off line.

US broadcaster HBO said its systems could not cope with demand and as a result Foxtel Now went into meltdown.

Foxtel spokesman, Bruce Meagher said: “We are devastated that some customers experienced technical issues tonight. As was the case in the U.S. and Latin America, the unprecedented rush for a subscription just prior to the telecast, crashed the system.

“Foxtel engineers are working through the night to resolve the issue. It’s most unfortunate and we apologise to those affected.

“We are committed to resolving the technical faults immediately and together with our broadcast partners around the world, we are giving this the same degree of priority.

“We assure anyone impacted that they will be able to watch the first episode of Season 7 either On Demand or via one of our encore screenings throughout the week. 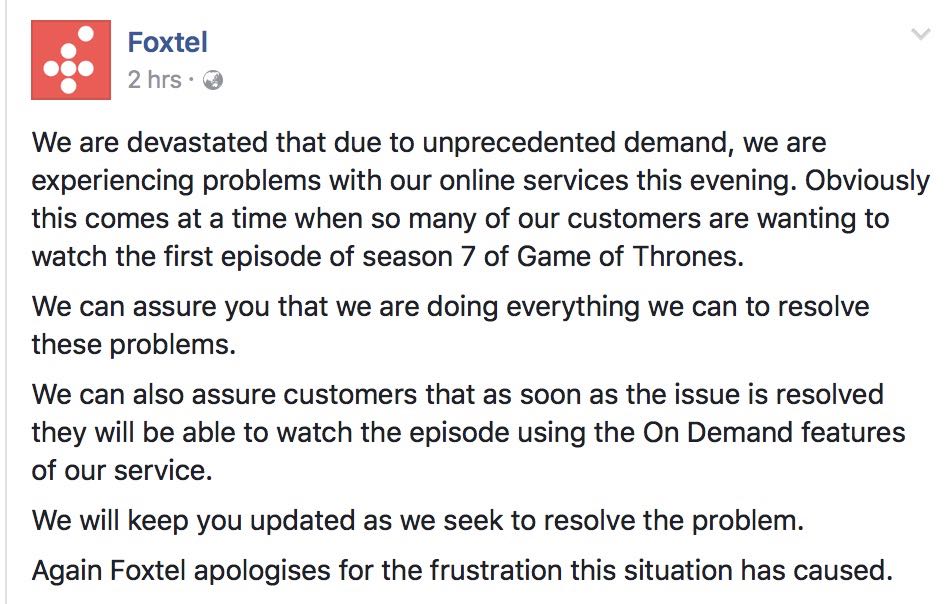 “We will continue to communicate with affected customers to ensure they are fully informed,” he said.

Game of Thrones is the jewel in the crown for the Foxtel Now service and has been the focus of most of its advertising campaign.

With thousands of customers eager to watch the first new episode of Season 7, Foxtel Now – a service designed to go head-to-head with Netflix and Stan – has fallen at its first major hurdle.

At about 10PM (Sydney time) Foxtel posted its first announcement to say it’s online service was experiencing problems due to unprecedented demand.

Many were calling for refunds while others vowed to cancel their service.

On social media, Foxtel was trying to placate these angry viewers by telling them others were experiencing the same issues.

Soon after Foxtel confirmed there was an outage with its online services and were investigating the issue.

It appears the problem occurred in the evening when tens of thousands of viewers sat down to stream Game of Thrones Season 7 Episode 1.

Viewers were greeted with an error message that read: “unknown copy for key [SR101_title]”.

Foxtel’s message posted to its Facebook page said: “we can also assure customers that as soon as the issue is resolved Bell be able to watch the episode using the on-demand features of our service. We will keep you updated as we seek to resolve the problem. Again, Foxtel apologises for the frustration this situation has caused”.

The broadcast side of Foxtel continued without a hitch.

By 11pm, all Foxtel Now services appeared to be back to normal – including Game of Thrones.

Is Foxtel Now worth using after the Game of Thrones meltdown