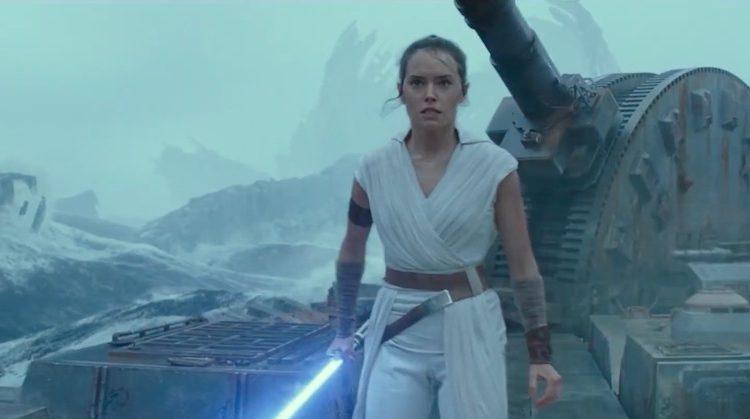 The final trailer for Star Wars Episode IX has been released and it has given us a tantalising view of what to expect. We’re going to take a deep dive and let you know what we’ve noticed before revealing to you our theory on what’s going to take place.

We won’t reveal that theory until the very end of this story once we’ve given you a frame by frame look at what we saw in the trailer.

What we’ve got to say may be a potential spoiler for some but we will give you plenty of warning for those who want to avert their eyes.

REY TRAINING ON A JUNGLE PLANET

Rey drops a helmet that look like the blast shield is down and if you look carefully you’ll see she’s being following by training remotes which she knocks aside. This helmet also looks like the one worn by Leia on Endor in Return of the Jedi. So is this Endor?

Rey jumps a chasm on the same jungle planet. Could it be Endor?

The last shot on this jungle plenty – you can see Rey racing along the ridge with lightsaber in hand! And all the while Finn is saying “it’s an instinct, a feeling. The Force brought us together”.

REY BACK TO HER SCAVENGING WAYS

In the next shot after her jungle training Rey is leaping from one ledge to another inside wreckage of some sort. We’re betting this is the ruin of the second Death Star which was destroyed – over Endor – in Return of the Jedi. I’ll ask again – is this Endor??? That’s where the wreckage would have fallen.

GETTING THE GANG BACK TOGETHER

This pre-battle shot brings together Poe and Fin with Lando Calrissian and even a Mon Calamari – believed to be the son of Admiral “it’s a trap” Ackbar. Poe’s voice-over also says: ‘good people will fight if we lead them”.

Poe, Finn and Chewie stand in front of Poe’s X-Wing on the jungle planet before launching into battle.

BACK TO THE FUTURE

Is that the hammerhead corvette Tantive IV from A New Hope – the Alderaan cruiser Leia was aboard with the Death Star plans – but what’s it doing on this jungle planet (Endor anyone??) and does it still belong to Princess Leia?

This long platform being battered by waves is (we think) what’s left of the second Death Star. You can just make out Rey and her blue lightsaber. It is here where she battles Kylo Ren.

Rey awaits Kylo Ren for their lightsaber duel. The voice over from Rey says: “people keep telling me they know me – no one does”

“But I Do” Kylo Ren says as emerges from the rain – soaked to the bone and ready to confront Rey once again.

Kylo Ren’s lightsaber must have an IP68 rating – water-resistant to a depth of four metres for 30 minutes.

Next we see a fleet of First Order Tie Fighters heading toward an icy mountain range on the planet believed to be Kijimi – home of Zorri Bliss.

Then we see Emperor Palpatine’s throne – believed to be made from volcanic rock from the planet Mustafar – and hear him say “Long have I waited. And now….”

A sunken Star Destroyer bursts through the ice. Was an entire fleet hidden underwater for all these years?

It looks like every ship every to appear in a Star Wars films is in this shot from all three trilogies and from some of the cartoons. And check out the Millennium Falcon and that ROUND radar dish! That was knocked of in the superstructure of the Death Star as they were flying inside to blow it up in Return off the Jedi so what’s it doing here??  Palpatine continues: “your coming together……”

The gang together in the Millennium Falcon cockpit – but where’s Lando? Here Rey is at the controls.

BACK TO THE DEATH STAR RUINS

Rey piloting an open cockpit vehicle towards the Death Star ruins. Palpatine’s voice over concludes: “will be your undoing?

Our first glimpse of Babu Frik – a droid smith – working on Threepio. Take a look at the worried Rey in the background.

Zorri Bliss (Keri Russell) is on the left with Poe, Rey and Finn – it must on the ice planet because they are all wearing coats – as they talk to C-3P0. Get the tissues out now. Poe asks: “what are you doing there Threepio?”

“Taking one last look sir – at my friends,” Threepio replies – with a bunch of cables coming out off the back of his head. I think there’s something in my eye. Tears are flowing now….

C-3P0 reaches down and pats R2D2 – his life long companion. Now I’m a complete mess. Could this be the end of Threepio – surely not.

Poe, Finn and Chewbacca battle through a First Order ship or base and First Order troopers are falling left, right and centre.

And we see the hug from Rey’s side…..

We’re back onboard the Falcon – but this time Lando is driving.

A Y-Wing – possibly piloted by Zorri Bliss – takes aim at a Star Destroyer’s cannons. And Luke concludes – “your destiny”.

Next we see the Resistance on horseback – these creatures are actually Orbaks from the desert plant Pasaana – but here they are galloping on top of a Star Destroyer.

DEJA VU – ALL OVER AGAIN

That looks a lot like the Emperor’s throne room on the Death Star at the end of Return of the Jedi – wait a minute!! Rey faces off with Kylo Ren in what’s left of the throne room.

You don’t need to be lip reader to know that Finn is calling out to Rey – does he want to warn her? Get her attention? Looks urgent….

Rey and Kylo Ren in a white chamber – we thing this is Ren’s fortress of solitude complete with Darth Vader’s melted helmet retrieved from – you guessed it – ENDOR!!! But wait minute – watch out for…..

Whoops – they smash the pedestal supporting Vader’s helmet and send it flying. Kylo Ren reportedly fixed his helmet with pieces from Vader’s helmet.

Was this is a fight or are they battling together like they didn’t in The Last Jedi. See Rey is holding her lightsaber in her right hand – and a dagger in her left. Two weapons are better than one when you confront Supreme Leader Kylo Ren.

RIDING INTO THE SUNSET

Resistance fighters riding towards a massive fleet on the Orbaks – note the countless Star Destroyers in the backgeround.

Rey confronts the Emperor – is he sitting on a throne or a piece of machinery – you can just see his hood flapping slightly in the breeze. This is no doubt one of the climactic moments.

THE FORCE WILL BE WITH YOU – ALWAYS

Just as we got ourselves together after C-3P0’s seeming final moment – we hear Luke day “the Force will bet with you” and Leia completes the sentence with “always!” We’re sobbing now…..

if you don’t want to hear what we think could be a potential spoiler it’s time for you to get out of here….

There are lot of callbacks in Rise of Skywalker – the Emperor, a large fleet of Imperial Star Destroyers, the Tantive IV from A New Hope, the Millennium Falcon with its old circular radar dish – one would think they’ve gone back in time.

Yes, we believe there’s an element of time travel in the storyline.

The Emperor died at the end of Return of the Jedi at the hands of Darth Vader as he turned back to the light side of the Force to become Anakin Skywalker once again.

The shot of all the ships – there were ships from all three trilogies in that shot – how did they all end up together??

We also only see Rey confront the Emperor – Kyo Ren is nowhere to be seen. We also think the evil Rey from the D23 trailer showing her dual bladed red lightsaber might also show an alternative timeline that she foresees – remember the Jedi can see the future. Turns out they might be able to see the past as well.

But why go back in time? Do they need to undo a certain event that shifts the timeline in the wrong way like Back to the Future II? Does the Emperor buy a Sports Almanac in the future and send it back to himself in the past.

If they have taken this time travel storyline it will also have taken a plot line from Avengers: Endgame for those keeping score.

So how do they go back in time? Here’s what we think happens.

Remember how C-3P0 is wired up and saying goodbye to everyone? Well we think because he can remember all the events back to A New Hope – he might be used as the conduit to get back to a certain time – an act that may ultimately destroy him – but it’s to help the Resistance. Where are those tissues…..

The upside of this story line would be seeing a young Leia and a young Luke. Maybe this is how Mark Hamill is used in this movie – to play his younger self. And they can create a young CG Leia like they did in Rogue One.

Anyway – that’s what we think. Let us know what you think.

May the Force be with you – always….