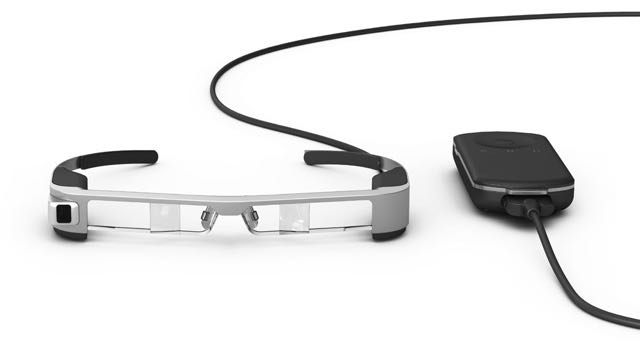 Epson has revealed cutting edge wearable technology – the Moverio BT-300 augmented reality smartglasses – which are set to revolutionise how we perform important tasks across multiple industries.

The new Epson smartglasses feature the latest silicon-based OLED (organic light emitting diode) digital display technology making them 20 per cent lighter than the previous model – the Moverio BT-200 – and the lightest on the market.

The smartglasses allow the wearer to see through the screen while at the same time viewing other information and augmented reality in their eyeline.

The technology has already been embraced across a number of commercial uses and industries and with some of Australia’s top education and research organisations including the CSIRO, the University of Western Sydney, Griffith University, Monash University’s Immersive Visualisation Platform and CAVE2 and Monash University’s Faculty of Information Technology.

Other use cases have been seen in medicine with surgeons able to perform microsurgery while referring to the information from their monitors in the smartglasses without taking their eyes off the patient.

Drone pilots will also be able to use the Moverio BT-300 and can see through the smartglasses the live video feed from the drone while keeping the small aircraft in sight instead of looking down at a screen on their controller.

The device is already popular with business customers and had also been embraced by software developers.

There is also an onboard 5-megapixel camera to record and capture what you’re seeing as well and an LED indicator allows those around you to know when you’re recording.

Tech Guide used the previous model – Moverio BT-200 – at the Australian Grand Prix in Melbourne during a tour of the Mercedes garage. Epson is a sponsor of the Formula One team.

We were seated at the back of the garage overlooking all the action and wearing the smartglasses while we were told about the staff and the race car.

In the glasses while we were looking around the garage, 3D information was displayed relevant to what we were seeing.

For example, when they were describing the engine an image of that same engine was superimposed into the smartglasses and I could see the real thing while it was being shown to us part by part.

We were also given a description of how the pit stops work and who does what to the car in the 1.9 seconds it takes.

The Moverio BT-300 is powered by an Intel Atom 5 1.44Ghz quad-core processor and runs the Android 5.1 operating system.

It has a resolution of 1280 x 720 through its transparent silicon OLED display and the onboard battery runs for six hours.

“Moverio is distinct from other smartglasses on the market where form often supersedes function, to the detriment of the product’s usability,” Mr. Atsunari Tsuda, general manager responsible for Moverio.

“Every design decision we make is driven by consideration for the product’s ultimate usage scenarios and our Si-OLED technology opens a new world for us in binocular see-through smart eyewear development.

“With OLED we can take advantage of reductions in power usage and weight, and improvements in response times, HD resolution, brightness and contrast.

“By choosing silicon rather than glass for our base wafer we achieve an even more high-density pixel display.”

The Epson Moverio BT-300 will be available in Australia later this year. Price is yet to be determined.