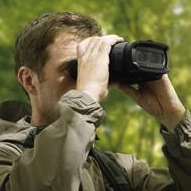 The Sony DEV-5 has up to 20 times magnification and SteadyShot Active Mode for image stabilisation and smooth recording.

The device is even capable of recording 3D stereoscopic full HD video which can be played back on a compatible flatscreen television.

Separate images for the left and right eye are captured by precision G Lens optics by Sony and Exmor R CMOS sensors and BIONZ processors. The result is clear and sharp video in 2D and 3D.

And it’s because of the advanced optics that the product can be used as digital binoculars which can offer up to 20x magnification which puts it in line with other high-powered binoculars on the market.

Users can take advantage of this level of digital zoom to record 2D video and images while 3D video is limited to 5x magnification.

One advantage the Sony device has over traditional binoculars is the fact that autofocus keeps your subject clear, even while your moving and zooming in.

The SteadyShot image stabilisation – the same feature which is found in Sony’s range of full HD camcorder – also comes into play here to provide those smooth and sharp images even at high magnification.

The autofocus works as close as 1cm in 2D and at a distance of 80cm in 3D.

Sony says the device features a minimal “stealth” design which is designed for comfortable use for extended periods and is also coated with a elastomer material which provides a firmer grip.

All of the controls are positioned on the top of the DEV-5 for easy access and easy operation even with gloved fingers.

There are many uses for Sony’s digital binoculars whether you’re a sports fan, on the golf course, a bird watcher or just want to capture your child’s performance at the school play or on the sports fields.

Also on board the Sony DEV-5 is a GPS receiver which can automatically geo-tag video clips on the move and on your travels.

The rechargeable battery provides up to three hours of 2D recording on a full charge.

The Sony DEV-5 digital recording binoculars will be available from November and will be priced at $1,999.