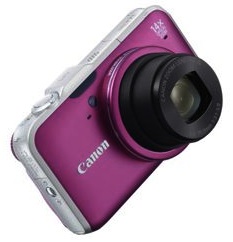 The SX220 HS is the world’s thinnest 24mm wide angle 5x optical zoom compact camera while the SX 230 HS is Canon’s first model to include GPS.

The Powershot SX230 HS is Canon’s first journey towards GPS and will be aimed at the user who wants to take quality pictures on their travels.

It has 12.1 megapixel resolution, a 3-inch LCD screen and full HD video recording. The SX 220 HS  is almost identical expect it doesn’t have built-in GPS.

The IXUS 310 HS has 12.1 megapixel resolution and a huge 3.2-inch LCD screen along full HD video capture at 24 frames per second. It will go on sale in March.

Canon’s IXUS 220 HS is also 12.1 megapixel but has a smaller 2.7-inch LCD screen. Canon says it is the thinnest camera that offers 24mm wide angle shooting and 5x optical zoom.

Another new feature to help users view the highlights of the day’s shooting  is Movie Digest which records four second of video before the picture is taken.

When you’re done for the day you can put all these mini clips together to create a little highlight reel of the day’s photography.

The IXUS 220 HS will be available later this month.

Canon’s EOS 1100D is aimed at users who are thinking of moving up to a digital SLR after using a compact.

It has a 12.2 megapixel CMOS sensor for high quality images and high definition movie recording.

To help first time users of a digital SLR there’s a Feature Guide function that provides explantions of the various shooting modes and other features.

It will be available late March in body-only, single lens kit and twin lens kit.

The 18 megapixel EOS 600D is the latest addition to the Canon entry-level digital SLR range for those who are looking to get more serious and more creative with their photography.

It is the first time a model of this type includes a flip-out 3-inch screen which allows users to frame their images even at difficult angles.

Another first are the Creative Filters which adds effects like soft focus, miniature, grainy black and white, toy camera and fish eye.

Users can capture full HD video with the ability to zoom up to 10x while shooting.

The Canon EOS 600D will be available in body only, single and twin lens kits in March.

Pricing has yet to be decided for any of these Canon models.

Why banning all mobile use while driving is absurd