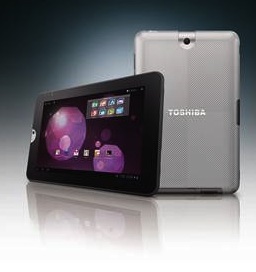 Toshiba is the latest company to join the ranks of tablet manufacturers with the AT100 which will launch in Australia at the end of June.

The device, which will cost $579, has a 10.1-inch high definition LED backlit touchscreen and will be running the Android 3.0 Honeycomb operating system.

Toshiba is already well known for its high quality laptops and its tablet has been created using that valuable experience.

One complaint from many tablet users is the lack of connectivity options but the AT100 has addressed that with a full size USB 2.0 port, HDMI and an SD card slot.

There is also a removable back cover which means you can easily replace the battery if necessary or decorate the device with different coloured cover.

Pre-loaded software on the tablet includes Toshiba Media Player that allows for music and movies to be streamed to other compatible DLNA (digital living network alliance) wi-fi devices in your home.

Also included is Toshiba’s Resolution + technology which which improve the quality of your videos by upscaling and increasing the resolution for crisper output.

There are two cameras on the AT100 – a 2-megapixel front facing camera and a 5 megapixel rear camera.

“The new Toshiba Tablet (AT100) offers a number of stand-out features to give consumers the ultimate choice in connected convenience and importantly offers more features than other similar products in the market,” said Mark Whittard, Toshiba (Australia) Pty Limited, Managing Director.

From launch there will also be a range of accessories available including the interchangeable coloured back covers ($29.95), removable battery pack ($79.95), a multidock with HDMI to connect the tablet to a TV ($89.95) and a portfolio cases which transforms into a stand ($49.95).

The Toshiba Tablet AT100 will be priced at $579 and goes on sale at the end of June.