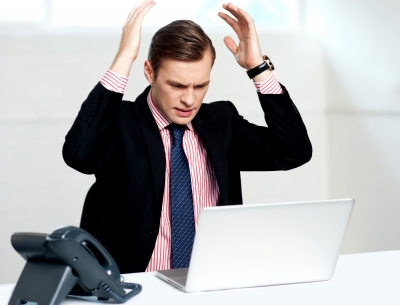 Time is money and if you’re technology isn’t working it can cost businesses $1 billion dollars annually in downtime and lost productivity, a new report reveals.

A productivity study, conducted by Dick Smith among more than 500 respondents, found that 71 million hours are wasted on technical issues like paper jams, printer and photocopier issues and computer crashes.

The research showed a typical white collar worker can wasted up to two working weeks a year dealing with technology problems with one fifth saying they’ve spent an entire day to solve the problem at hand.

One third of respondents had to re-do documents because of computer crashes while a fifth have been late to meetings because they’ve had printer issues.

One in four said they have felt like smashing their computer or laptop and one in ten have been driven to tears because of lost documents or computer crashes.

But the study found one of the main issues is the reliance on old technology.

More than two thirds (77 per cent) of companies still use a fax machine.

“People are placing more and more demands on technology. For example, we’re more likely to use tablets for work and personal use which means we’re outgrowing our devices at a faster rate than we’re replacing it,” he said.

“There is also a lack of understanding on how best to use technological devices.

“For example, many people put pressure on their hardware to store data, when a more efficient ‘cloud’ storage system will get better results and prevent computer crashes and delays.”

With tax time just around the corner, employers and small businesses can actually take advantage of tax concessions and invest in new technology.

“With 30 June just around the corner, small businesses can get the ATO to subsidise these improvements by buying new equipment up to $6,500 and get an immediate tax write-off for the full amount this year,” says taxation expert and author Adrian Raftery, principal of Mr Taxman.

According to the study 55 per cent of small business owners were not aware of the available rebates and leave everything to their accountants.