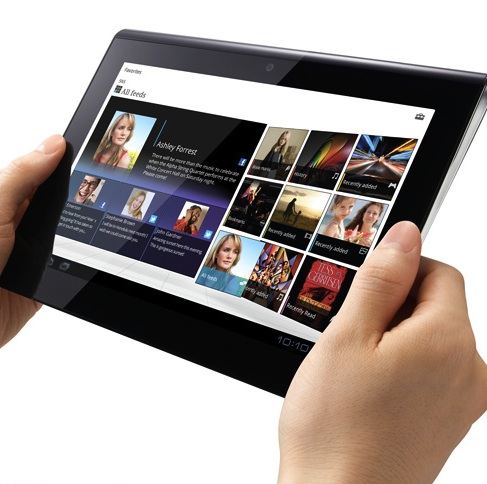 Sony unveils S1 and S2 tablets to take on iPad

Sony today officially introduced its products which will take on rival tablets from Samsung, Motorola and Apple.

The Japanese electronics giants is late to the party – it’s been a year since the original iPad went on sale – but believes it can compete in the crowded market.

The S1 and S2 have a 9.4-inch and 5.5-inch respectively and both will run the Android operating system.

They were officially unveiled in Tokyo by Kunimasa Suziki , deputy president of Sony’s consumer products and services group.

Each device will run Android’s 3.0 Honeycomb operating system with the S1 designed for home use and the smaller S2 to be used on the go.

The S1 has a tapered look with a curve on the top edge and was described by Suzuki as looking like a folded magazine.

Onboard the S1 is a Tegra 2 processor as well as a front and rear camera and full touchscreen interface.

The S2 has a clamshell design with dual 5.5-inch screens which folds to a size that is easy to slip into the pocket.

This side-by-side display, according to Suzuki, is “particularly relevant for reading digital books whose content is displayed on screen as two pages side by side.”

Both products will also be certified PlayStation devices and allow users to play games with them as well.

Sony did not announce a release date or pricing for the S1 and S2 devices.