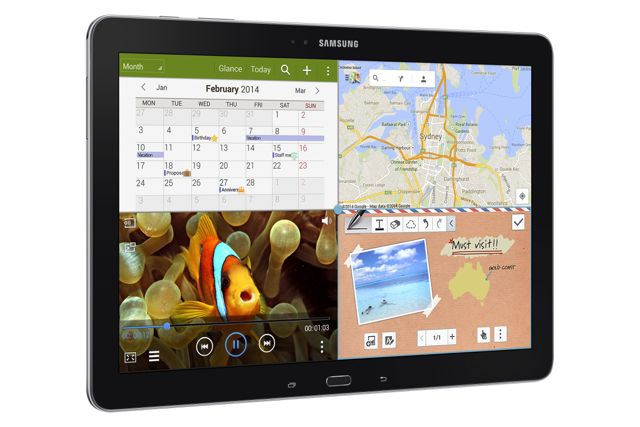 Samsung’s latest tablet devices – the 10.1-inch Galaxy TabPRO and the 12.2-inch Galaxy NotePRO – are available to buy in stores from today.

The devices, unveiled at the Consumer Electronics Show in Las Vegas in January, offer all-new multimedia and multitasking capabilities whether they are used for work or play.

Both of the new Samsung tablets are running the latest Android 4.4 KitKat operating system.

The Samsung Galaxy TabPRO is just 7.3mm thick and weighs in at 469g. The device’s 10.1-inch screen has a high resolution WQXGA display with more than 4 million pixels.

The new multi-window feature allows two applications to run side by side at the same time.

The device is powered by a quad-core 1.9Ghz processor with 2GB RAM and 16GB of internal memory and a microSD slot to expand the capacity by up to an extra 64GB.

The larger 12.2-inch screen is a stunning feature of the new Galaxy NotePRO.

It has more than 4 million pixels and, with the new multi-window capability, it can be divided four ways to run four different applications at once.

And like Samsung’s other Note products, the NotePRO comes with the S Pen so users can write directly in the screen. The device also has handwriting recognition.

The 12.2-inch Galaxy NotePRO is 7.9mm thick and weighs 750g. It also has a microSD card slot to expand the onboard 32GB memory by up to another 64GB.

The new Samsung tablets will be available to purchase from today at Samsung Experience Stores along with major electronics retailers.

Stay tuned for a full review of these products on Tech Guide soon.