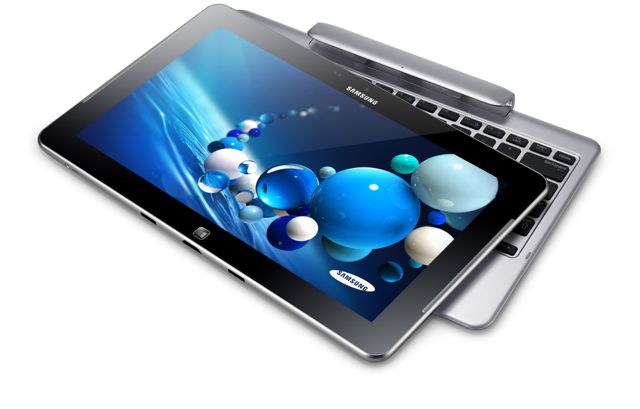 Samsung has launched the new ATIV brand for its range of smartphones, tablets and smart PCs running the highly anticipated Windows 8 operating system.

One of these products will be a new Smart PC which includes a tablet device which can also be docked with a keyboard to give it full laptop functionality.

Samsung’s range of Smart TV and smartphones are leaders on their respective categories and the company has high hopes its new Smart PCs running Windows 8 can enjoy the same success.

Just as Galaxy was the name for Samsung’s range of Android-powered devices, ATIV will represent an all-new line of products that will work within the Windows 8 ecosystem.

Tech Guide had a hands-on preview of the new Samsung convertible Smart PC at a special briefing in Berlin on the eve of consumer electronics and innovations show IFA.

The Samsung ATIV Smart PC and Smart PC Pro will have a 10.1-inch and 11.6-inch screen respectively.

These devices can offer the full functionality of a tablet including touchscreen control and the ability to write on the screen with the included S Pen which was first introduced on the Galaxy Note smartphone.

And when you’re ready to go into laptop mode it’s simply a matter of clicking the bottom edge of the screen into the keyboard dock.

This connection is enforced by physical latch but also incorporates a strong magnetic connection.

In laptop mode the ATIV Smart PC looked exactly like as regular laptop and wasn’t overly bulky the screen lid was closed.

The screen half of the product – which detaches to perform as a tablet – also featured several ports including USB, microHDMI, microSD and even a microSIM card slot for 3G connectivity.

These features sleek design and modern looks with full touchscreen capability, gesture controls through the built-in 720p web cam and with a screen resolution of 2560 x 1440.

The ATIV S Windows 8 smartphone has a 4.8-inch screen, NFC (near field communication) compatibility, is just 8.7mm thick and has an 8 megapixel camera.

The ATIV Windows 8 Tab weighs just 560g and also has a USB port, microHDMI and will come pre-loaded with a full version of Microsoft Office.

And all of these new Smart PCs and smartphones and tablets will all be AllShare Play compatible to allow data sharing with other Samsung devices in the home.

These new Samsung ATIV Smart PCs will be launched on October 26.

* Stephen Fenech travelled to Berlin as a guest of Samsung.