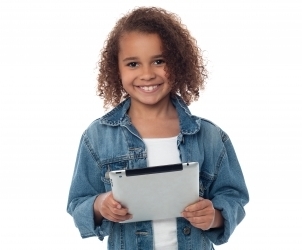 Tablets appear to have a healthy future according to the latest Roy Morgan Research study showing more than half of Australia’s kids own or use a tablet computer.

This is a dramatic jump from 2012’s figures which showed one in three children (33 per cent) owned or used a tablet device.

And it is girls leading the way with a lead of four per cent – up from one per cent in 2012.

The figures for tablet use among children aged 10-13 is actually 53 per cent while 49 per cent of six to nine year olds using a tablet.

“The speed with which tablet computers have become mainstream is a phenomenon that we’ll no doubt see repeated many times as more user- and kid-friendly technologies enter the marketplace,” says John La Rosa, Roy Morgan Research agencies general manager.

“Tablet computers will become a model for marketers looking to predict adoption trends in the future, and a case study in how devices move from being considered supplementary to necessary, desirable to indispensable.

“It didn’t take long after tablets were first launched for parents to recognise their value as an entertainment and educational device with multiple applications suitable for everyone in the house.”